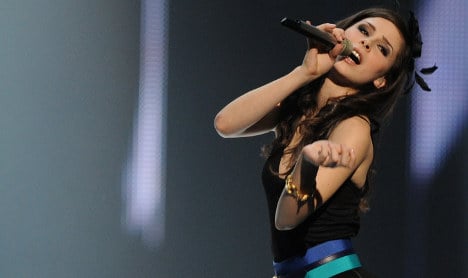 After her surprise first-place finish in the kitschy song contest, Lena Meyer-Landrut was even dubbed “the new face” of Germany. She was praised for her natural and unpretentious manner, supposedly representing a young, relaxed and optimistic generation.

But a year later, Lena-mania has yielded to at least partial disillusionment. She failed to fill most of the concert halls booked for her first national tour and the ratings for the show to pick her song for her second Eurovision appearance were mediocre.

It seems many Germans now find Lena’s attempt to defend her title calculating and insincere. But few could have foreseen the adversity the teen currently faces during her meteoric rise in 2010.

As an 18-year-old high school student, Lena auditioned for German entertainer Stefan Raab’s casting show to determine the country’s candidate for Eurovision 2010. She immediately captivated one of the judges on the show, ageing rocker Marius Müller-Westernhagen.

“You have star appeal,” he told Lena then. “The people will love you.”

He was right. Television viewers fell for the bubbly girl from Hannover, and Lena was a Eurovision favourite the moment she set foot in Norway’s capital Oslo.

When Lena strode onto the Eurovision stage wearing a simple black dress with dark-red lipstick, the decisive moment came. Her dancing appeared somewhat stiff and uncoordinated, but her voice and girlish smile were enough to win her the hearts and votes of millions. The contest was hers.

Toting a German flag, the singer trotted back onto the stage, speechless, holding her head in disbelief. “This is not real,” she uttered into the microphone, voice trembling.

Back then, at the peak of her popularity, she could do no wrong. Fans worshipped her. President Christian Wulff insisted on greeting her at the airport on her return to Germany. Her single “Satellite” shot to the top of the European charts.

Over the course of the next year, Lena raked in music awards and even ventured into film by voicing a character in an animated film.

But Raab’s hasty declaration in the afterglow of Lena’s victory in Oslo that she would defend her title when Germany hosted the competition in 2011 had a boomerang-like effect. Heavily criticized in some quarters, Lena appeared unfazed at first, but is now just hoping not to be embarrassed.

“I try not to think about it,” she recently said when asked about her chances of repeating her Eurovision victory on May 14 in Düsseldorf.

Of course, if she leaves the stage a two-time contest winner, she will silence her critics forever. But if she falters, as many seem to think she will, her image could suffer a fatal blow as the magic of Oslo is irrevocably lost.

Still, she hadn’t entirely lost her plucky nature after practising her new number “Taken by a Stranger” on Saturday.

“I think it will be a great performance,” she said.