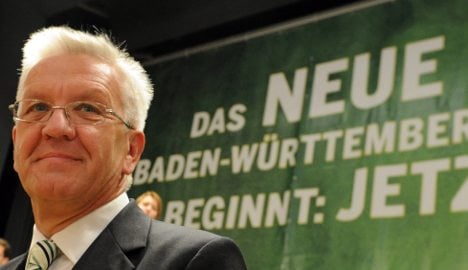 “I am in favour of a speed limit for three reasons. It reduces the number of road accident victims. It reduces traffic emissions. And it provides more fluid traffic conditions,” he said.

The road tax should apply to all roads, he said, and should be, “as individualised as possible, thus related to time, place, length of road use and type of car.” This should reduce traffic in total, he said.

Car producers, of which a number are based in Baden-Württemberg, will have to get in line with tougher environmental standards, he said.

“We will push for tougher framework conditions, concerning, for example, pollutant emissions. Experience shows that ambitious goals function like a goad for innovation.”

Car factories will have to become more environmentally friendly, he said, even though it might be more expensive.

“I expect that premium producers create energy- and resource-efficient product lines. That could be a little more expensive, as most of those who buy limousines can take it. Above all, Daimler and Porsche should see themselves as mobility companies in five years’ time – and no longer just as car factories.”

He said he would take up the offer from Porsche CEO Matthias Müller for a meeting as soon as possible, confident that they were talking the same language.

“Petrol-greedy luxury limousines are not the future,” he said. “We should no longer only export cars, but also a new idea of what a chic car is in the future. I believe that the companies think this way too.”

The Greens’ coalition with the Social Democratic Party in the state will present no danager to jobs in the car industry, assured the state Green party leader Chris Kühn on Saturday.

Speaking at the party’s special conference ahead of the signing of the coalition contract, he said it was clear that no-one wanted to reduce job number in the auto industry.

Wind farms would also form a part of the state’s future, said Kretschmann. “There will be completely new wind parks – large, modern facilities – above all in the Mittelgebirge, on the Schwäbisch Alb and in the Black Forest,” he said.

He said fears that the landscape could be covered in random wind turbines were unfounded, and that the farms would be concentrated in certain areas, although he admitted this would provoke some opposition.

If people wanted to step away from nuclear power, they had to accept the alternatives, he said.

“A change of the industrial society changes the landscape; that is the price that we have to pay for progress. One cannot discard nuclear power, damn coal-generated electricity, want to maintain living standards and at the same time demand that the landscape should not change.”