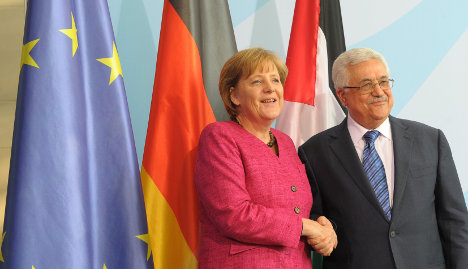 Speaking after talks with Palestinian leader Mahmud Abbas, Merkel said Germany believed it would be “unhelpful” to recognise a Palestinian state but said all agreed it was “crucial” that negotiations with Israel resume.

“Germany and France both want quick progress. I think that is the point we should concentrate on,” Merkel said.

“We want a two-state solution. We want to recognise a Palestinian state. Let us ensure that negotiations begin. It is urgent.”

Germany had reiterated Wednesday that it would not recognise a Palestinian state without Israel’s acceptance after President Nicolas Sarkozy hinted France could do so if peace talks are not back on track by September.

Merkel had said after talks with Israeli Prime Minister Benjamin Netanyahu last month that any German recognition of a Palestinian state would have to come in the context of mutual Israeli-Palestinian recognition.

US-brokered peace talks between the Israelis and Palestinians last September broke down over Israeli settlement activity. The Palestinians are standing by a target date of September 2011 for declaring an independent state.

Abbas underlined after the talks with Merkel ahead of a working dinner that he supported a German-French-British bid to relaunch peace talks.

“We said recently that we were ready to accept without debate the proposal by the trio – Britain, France and Germany – given to the Security Council for a return to negotiations,” he said. Germany currently holds a non-permanent seat in the UN Security Council.

The three nations laid out their position in a communique issued in February after Washington torpedoed a Security Council vote condemning Israeli settlement activity, in which they called for “clear parameters” relating to the 1967 borders, security issues, refugees and Jerusalem.

Abbas stressed that a reconciliation deal of his Fatah with Hamas signed Wednesday in Cairo would not change the Palestinian goal of a two-state solution.