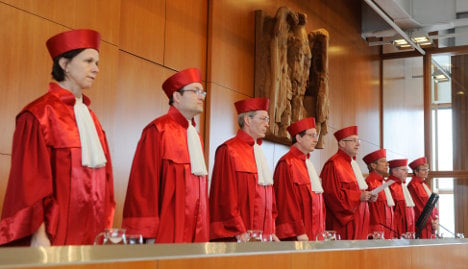 The Karlsruhe court’s ruling also means lawmakers will have to overhaul the practice of preventive detention, under which prisoners deemed too dangerous to release can be held indefinitely after their original sentences run out.

In making its decision, the court has backed a previous ruling by European Court of Human Rights, which found in January that Germany’s system breached the fundamental right to freedom contained in the European Convention on Human Rights.

The president of the court, Justice Andreas Voßkuhle, said that the most dangerous prisoners may still, under very strict conditions, be held beyond their existing jail sentences. But most must be released unless it can be shown that they pose a very high danger.

Therefore federal and state lawmakers needed to overhaul the system. Preventive detention must be clearly delineated from ordinary jail, for example basing it around therapy and giving detainees a realistic prospect of being released.

The existing rules can continue to apply until a new regulation comes into effect, which must happen by May 31, 2013. But they can only apply in cases where freedom for the prisoner would mean the risk of “serious violent or sexual crimes in future.”

Furthermore, there had to be “strict checking of its proportionality.”

The court also ruled that a law introduced in 1998 scrapping a 10-year limit on preventive detention and allowing it to be applied indefinitely could not be used retroactively. It was judging the complaints of four prisoners in preventive detention – two in Bavaria, one in Baden-Württemberg and one in North Rhine-Westphalia.

In such “old cases,” detention could only continue if the offender was suffering a mental illness. Furthermore, his behaviour must indicate a “high degree of danger of serious violence and sexual offences.”

Assessments would need to be made “without delay,” the court ruled. Otherwise the prisoners would have to be released by December 31.