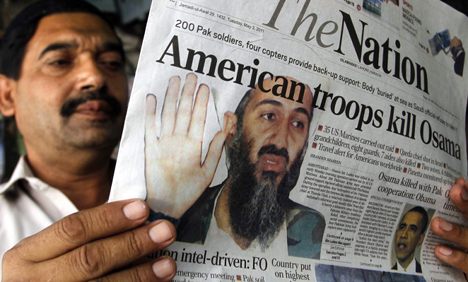 Katrin Göring-Eckardt, Green party MP, Bundestag vice president and leading member of the Evangelical Church of Germany, told the Berliner Zeitung she was glad bin Laden was no longer leading a terrorist group. “But you can’t be happy about his death,” she said.

On Monday, Merkel told reporters that bin Laden’s death at the hands of US forces was “good news.”

“I’m glad that killing bin Laden was successful,” she said.

The criticism of Merkel’s comments came not only from political opposition, but from her own party, echoing discomfort expressed by some observers at the emotional, celebratory reaction of many Americans and foreign politicians around the world after bin Laden’s killing.

Siegfried Kauder, a member of Merkel’s conservative Christian Democratic Union (CDU), slammed her remarks, calling them reminiscent of something a person would say in the “middle ages.”

“I would not have formulated them like this,” he said to the Passauer Neuen Presse, expressing doubts that killing bin Laden was even legal under international law.

Other politicians said they would have preferred to see bin Laden arrested.

Martin Lohmann, in charge of the CDU’s Working Group of Engaged Catholics, said killing anyone, even a terrorist, “can never be cause for joy for a Christian.”

“It would have been better if Osama bin Laden had been arrested and brought to justice,” he added.

Merkel’s spokesman Steffen Seibert was forced later on Wednesday to defend her comments.

“This sentence should not be treated in isolation,” Seibert told a regular briefing. “The motivation for her being pleased was that this man no longer poses a danger. The world will hopefully be a bit safer now.”

He added that Merkel “appreciates that someone hearing just this one sentence – and on television it was often only this sentence that was broadcast – maybe found ‘death’ and being ‘pleased’ in the same sentence as inappropriate.”

Despite the criticism, most German political figures said they were relieved bin Laden would no longer be stirring up trouble.

“The security forces must remain very vigilant,” he told the Hamburger Abendblatt newspaper, though he described the US operation as a success.

Uhrlau emphasized that bin Laden no longer had a day-to-day role in planning terrorist operations, but he acknowledged the man’s power as a “role model” and said terrorists would not easily be able to fill the gap bin Laden’s death leaves.