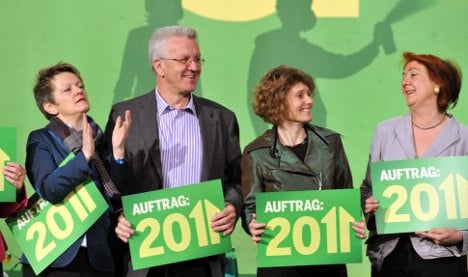 In a survey by pollster Forsa for news weekly Stern, the Green party garnered 28 percent, up one point from last week. Meanwhile, Merkel’s centre-right Christian Democrats held steady at 31 percent.

The centre-left Social Democrats (SPD) dropped one point to 21 percent – the party’s worst result since the summer of 2009.

Merkel’s junior coalition partners, the pro-business Free Democrats (FDP) continued to wallow below the threshold necessary to win seats in parliament at 4 percent. And the socialist Left party dipped 1 percentage point to 8 percent.

The poll puts voter support for Merkel’s centre-right coalition 14 points behind a potential centre-left alliance of Greens and the SPD.

The two parties will present their joint cabinet for Baden-Württemberg later on Wednesday after they were able to break the conservatives’ six-decade grip on power in the southwestern state by winning an election there on March 27.