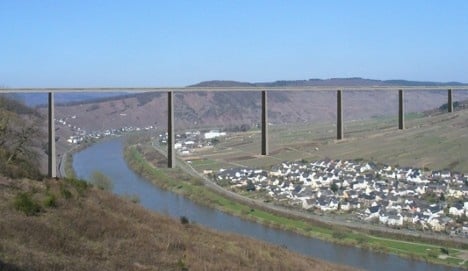 Pro-Mosel, a group of vintners, businesspeople and residents of southwestern Germany’s scenic Mosel Valley, said they were shocked by the outcome of state coalition talks late Monday in Rhineland-Palatinate that gave the green light to the bridge.

The group was particularly incensed by a U-turn by the Green party, which had campaigned during hard-fought elections in the state in March against the four-lane motorway crossing.

Opponents, including powerful international wine critics, say the project is an eyesore that could destroy the delicate alchemy of the vineyards’ steep slate slopes, drip irrigation and sun exposure that create stellar white wines.

The bridge has been a source of great discord in the area. Werner Schmitz, who lives in Ürzig, a town that will be in the shadow of the new bridge, told The Local last year that 90 percent of residents are for the bridge. “We need this bridge to bring in more tourists,” he said.

But anti-bridge campaigner Knut Aufermann said some people don’t understand the value of unspoilt scenery that the bridge will allegedly destroy. “We fear for the valley. It is going to be dead in 10 years’ time,” he said.

Click here for a photo gallery of the Mosel Valley.

The Hochmoselübergang (Upper Mosel Crossing) has been in the works since 1968 at the height of the Cold War, when the tens of thousands of US troops stationed in the region sought a speedier link between their bases.

The intervening years were marked by revised plans, court challenges and impact studies which the opponents say failed to address their key concerns.

Then came a decisive 2008 stimulus package. At a cost of an estimated €330 million ($488 million), the project would be an east-west supplement to Germany’s road network, already one of the densest in the world. It is slated for completion in 2016.

The plan’s centrepiece would be a 1.7-kilometre-long (one-mile-long), 10-column bridge spanning two low mountains at a height of 158 metres, tall enough for St. Peter’s Basilica in Rome to fit beneath with room to spare.

Construction on the project began two years ago but a record 15-percent result in the state election by the Greens led opponents to hope they could stop it.

However the Greens on Monday ceded to their new coalition partners, the centre-left Social Democrats, with state party leader Eveline Lemke admitting that approving the bridge project was the “toughest thing to swallow” in the talks.