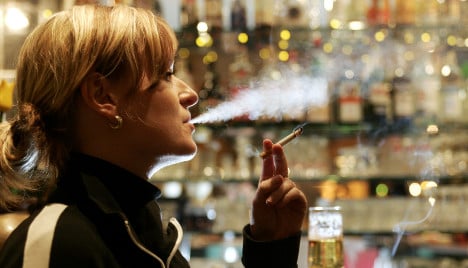 The German Cancer Research Centre (DKFZ) surveyed nearly 3,000 eating and drinking venues in 10 major cities and found that complex and numerous exemptions are being widely exploited to allow smoking to continue.

“People who want to drink a beer in the evening must in many areas search around if they don’t want to be exposed to passive smoking,” the centre said in a statement. “The same applies to gambling venues.”

In the largest ever study into the effectiveness of state smoking bans, the centre found that smoking still went on in more than 90 percent of gambling halls. And 8 percent of restaurants also still allowed smoking, generally in clear breach of state laws.

“The state laws on anti-smoking protection must be regarded as having failed,” said Stefanie Seltmann of the DKFZ.

Non-smokers were still being exposed to passive smoke, the centre said. The survey also found that smoking clubs are for most part not properly signposted and often even a notice saying the club is restricted to people aged over 18 is missing.

Since August 2007, laws have been gradually introduced in all German states to protect people against passive smoke. However many exemptions exist.

Düsseldorf had the most smoking bars and also the most breaches of the law compelling drinking venues to post signs saying the allow smoking. There, 41 percent of all hospitality venues – from restaurants to gambling halls – are filled with blue haze.

Munich came out on top. A general smoking ban has been in force there since August 2010. Yet even here, 17 percent of bars make use of the single exception that is still possible in Bavaria – that smoking is permitted in private clubs or associations.

“The large number and complexity of the exemptions have led to a situation in which adherence to the smoking bans in the hospitality sector is barely controlled,” the DKFZ’s Ute Mons said.

The DKFZ is calling for uniform regulations against smoking across the country.