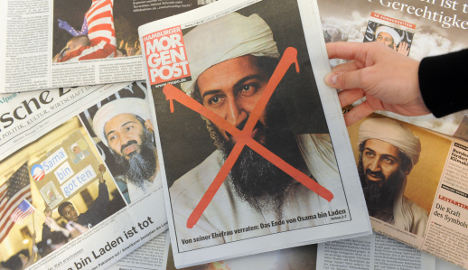 Nearly a decade after the attacks on September 11, 2001, the world’s most powerful nation has killed the man who became perhaps its greatest pre-occupation for those intervening years.

Germany’s media agree that Islamist terrorism did not end on Sunday when US Navy SEALS raided Osama bin Laden’s compound in Pakistan and killed the al-Qaida leader and 9/11 mastermind.

They also agree bin Laden’s death will have a restorative effect on the US – though whether it is America’s justifiable national pride or its lost sense of direction that is restored, depends on whether commentators agreed with the course the US has taken for the past decade.

US President Barack Obama won strong and broad praise in the German press for his handling of the affair, particularly the sober way he revealed the news, free from triumphalism that could further inflame the Muslim world.

Coinciding with the pro-democracy uprisings in North Africa and the Middle East, the death of bin Laden could, various newspapers argued, draw a line under a decade of suspicion between east and west – if leaders seize the moment wisely.

The centre-left Süddeutsche Zeitung wrote that the US actually weakened itself by declaring its “war on terror” during the administration of President George W. Bush.

The US made Osama bin Laden into an icon, it argued. Bin Laden’s death will therefore no doubt have a cathartic effect on the world’s most powerful nation. But its pursuit of bin Laden and terrorism have derailed America. Obama’s more restrained foreign policy is getting it back on track.

“America has in the past decade surrounded itself by protective walls – physical as well as mental barriers. The Land of the Free has paid the price for supposed security in the most important currencies: openness and freedom. Even if bin Laden fell short of his actual goal and never created the caliphate, he derailed the global power, the US, and triggered the diminution of its power.

“Barack Obama, Bush’s successor, was the one who recognised this disastrous connection and set the country on a policy of international self-restraint. This will one day be recognised as possibly as the most important foreign policy achievement of the current president. America is becoming less of a source of friction for terrorism – and can therefore again unveil its strength. Obama and Osama – terrorism has met its match.”

The right-wing Die Welt wrote that bin Laden’s death was a hugely important symbol. It was necessary to rob bin Laden of his aura of invulnerability and demonstrate to the world that America remains strong.

“America has once again powerfully demonstrated with the death of bin Laden that one cannot go unpunished for attacking and humiliating the USA. America has shown that it doesn’t forget. And that it commands the resources, the technology, the courage and the readiness to pursue offenders tirelessly and seize them at a great distance.”

“In words that would never come from the lips of a German politician, he justified the death of a man from the sphere of America’s values. No talk of revenge, but a clear signal that one indivisible nation is so sacred to Americans that they will always defend it pragmatically – the pilgrims aren’t supposed to have fled Europe’s despots for nothing.”

The world has often felt that the US has got most things wrong since September 11, 2001 – notably the wars in Iraq and Afghanistan. But things look a little different today, the paper argued.

The uprisings in Tunisia, Egypt, Libya, Bahrain and Syria – perhaps helped by the downfall of Iraq’s Saddam Hussein – defy the old pessimism that the Middle East was a choice between fanatical theocrats and secular autocrats.

But the conservative Frankfurter Allgemeine Zeitung said security officials around the world needed to remain vigilant to combat the many-headed “hydra” al-Qaida after bin Laden’s death.

According to the paper, not since Gavrilo Princip – the Serb who killed Austria’s Archduke Franz Ferdinand and helped start World War I – has a terrorist had such influence on the world’s great powers and the fates of millions of people.

“A massive effort is still required to keep Islamist terrorism in check. (Bin Laden’s) unmatched ‘success’ will encourage imitators, even when America under Obama is doing all it can to make peace with the (Muslim) world – including holding bin Laden’s funeral according to Islamic rites.”

But the FAZ said American goodwill will not be enough.

“Bin Laden’s demise comes at a time when many hope there will be a new beginning – the start of the democratization of Muslim nations in the Middle East. Some in the West are convinced democrats will shy away from war and extremism.

“But that certainly doesn’t cover every possible development, as a look at the Gaza strip shows. The Hamas-led government there won an election and that didn’t keep it from condemning the killing of bin Laden and praying for the salvation of a mass murderer responsible for the deaths of thousands of innocents, including Muslims.”

And Berlin’s centrist daily Der Tagesspiegel said bin Laden’s death was a watershed moment that would affect the West’s relations with the wider Muslim world.

“The terror threat is in no way banished. It is likely to be hardly lessened at all. And there could be a long philosophical debate about the legality of extrajudicial executions. However, killing this top terrorist indisputably symbolizes the vulnerability of the ideology he so embodied.

“With him dies the mythology of invincibility gained while hiding out in the caves of Tora Bora. The glorified death of martyrdom won’t change that.”

The paper acknowledged there had been serious mistakes made in the war on terror – the reasons for invading Iraq, the prison camp at Guantanamo Bay, and the torture at Abu Ghraib.

But Der Tagesspiegel said the defining characteristic of open societies was not their infallibility but their self-correcting nature.

“That wasn’t always the case, but overall the West can be proud of itself. In the wake of 9/11, it found the balance between overreacting and ignorance. Despite deep internal differences, it held together. Now it would behove (the West) not to be blinded by its successes. Its worst enemy remains the tendency to make staying vigilant routine. Osama bin Laden is dead. But from Tehran to Hezbollah and Hamas – militant Islamism has not yet been vanquished.”