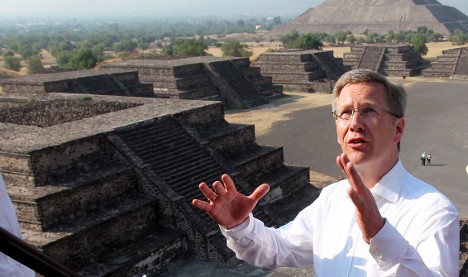 “There are reports about gruesome crimes by drug gangs that are disturbing,” Wulff said on Monday at a state banquet held by his counterpart Felipe Calderon in Mexico City.

The fight against organised drug crime, which is claiming thousands of lives each year, must be met “with all resoluteness” and with international leadership, he said.

Given the drug market was global, Germany would work with Mexico to strengthen co-operation in international security to fight the narcotics trade.

Alejandro Poire, Calderon’s top security adviser, said he was optimistic. Thanks to comprehensive reforms of the justice system and the police forces, Mexico now has the chance to break up the decades-old structure of organised crime, he said.

Speaking at the National Autonomous University of Mexico to about 500 students, Wulff called on young Mexicans to come and study in Germany.

“Our universities are open to you,” he said. “Every euro invested there pays dividends many times over.”

Wulff also visited Mexico’s pyramids of Teotihuacan at the weekend. He flies to Costa Rica on Wednesday to continue a tour of Latin America.