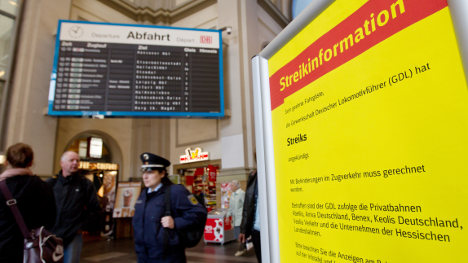 The GDL train drivers’ union, which has called several strikes already this year amid a battle with employers over pay, announced drivers would walk off the job from 2 pm Tuesday until 2 pm Friday.

However the latest strike will be less widespread. GDL said it had arranged pay talks with all of the subsidiary companies of Hessische Landesbahn along with some firms under Netinera and BeNEX.

National operator Deutsche Bahn is not affected. GDL is demanding a uniform wage deal for drivers at private operators, equivalent to the deal currently given to Deutsche Bahn drivers.

GDL struck a deal with Deutsche Bahn in April for about 20,000 train drivers who work for the national operator.

Many private firms argue they cannot afford to pay the same wage deals as the national giant.