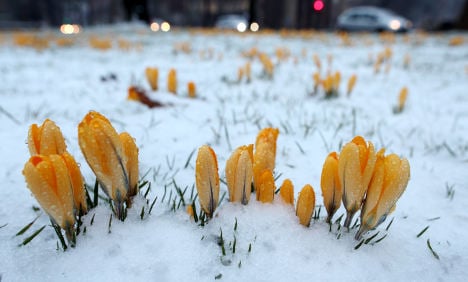 “The high point (or rather low point) of this cooler period will be Wednesday,” said DWD meteorologist Peter Hartmann. “Although the Alps will only see snow up high, there will be wet snowfall at lower elevations in the Erzgebirge.”

But the cooler, wetter weather will offer a measure of respite to German farmers who have had to deal with unusually dry weather for much of the past month.

Monday night, skies will be clear in the north and west, while clouds will cover the southeast.

Temperatures will hover around 9 degrees Celsius in the southwest, while northern regions and the central mountain regions could see temperatures drop as low as -3 with snow.

On Tuesday, the west will have the sunniest and driest weather, with high temperatures reaching a relatively balmy 18 degrees in the southwest. The north and east will be sunny before clouds move in for afternoon showers. Temperatures in coastal regions will remain around 7 degrees, cooled by brisk winds out of the northeast.

The southeast will see heavy cloud cover and showers, with highs between 6 and 12 degrees. The Alps and Saxony’s Erzgebirge (Ore Mountains) will get snow, though any resulting white stuff will not last long.

A light frost is possible in most regions Tuesday night, but skies will be clear other than on northern coastlines and in the Danube valley, with temperatures hovering between 0 and 6 degrees.

Wednesday will bring the coldest temperatures of the week. The south will be cloudy but dry, while the east and southeast could see showers and brief thunderstorms, with sunshine prevailing in most other regions.

Despite Wednesday’s sun, moderate winds from the east will keep high temperatures between 8 and 16 degrees.

Wednesday night, the north and southeast will be cloudy, but skies in the rest of the country will be mostly clear. With temperatures between 0 and 4 degrees, frost is possible, especially in the eastern and southern highlands.

Warmer, dryer air is in store for Thursday, with clouds and showers expected only in the far east. High temperatures will reach 12 degrees in the northeast and 18 degrees along the Rhine.

Thursday night, temperatures will drop to between 1 and 6 degrees, while a light frost is possible in southern regions. Winds at night will remain mild throughout the country.

However, leading into the weekend, temperatures will start to rise.

“The weekend forecast is good, especially for those who aren’t waiting for rain,” Hartmann said.