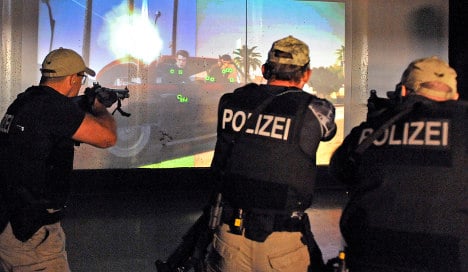 Merkel’s conservative Christian Democratic Union (CDU) and its coalition partners, the Free Democratic Party (FDP), are at loggerheads over laws allowing the storage of personal phone and internet records, as well as extending the exceptional powers currently given to anti-terror authorities.

Interior Minister Hans-Peter Friedrich, a member of Merkel’s Bavarian allies the CSU, called on Sunday for the special powers for security services – which allow for more intrusive investigation methods – to be extended. They are due to run out at the end of this year.

His call came after the arrest of three members of the “Düsseldorf cell” of Islamic extremists and on the day before the world woke to learn the US had killed al-Qaida leader Osama bin Laden in Pakistan.

“The case in North Rhine-Westphalia has shown how operations-ready our state institutions are. It cannot now be deduced from that, that we need tougher laws and ever-greater curbs to basic freedoms,” she told Monday’s Financial Times Deutschland.

The conservatives and the FDP have been at odds on security legislation for months. Merkel’s conservatives want to extend anti-terror legislation passed after September 11, 2001 – and renewed in 2007. It grants authorities wider access to various personal data. Much of this legislation is set to expire in January.

They also want to revive data retention laws, knocked down by the Constitutional Court last year, that compel phone and internet companies to keep data on all customers for six months.

The FDP argues that the arrests in Düsseldorf and Bochum, the result of investigations by the Federal Criminal Police, did not result from the special powers given to investigators.

Federal prosecutors have indicted the three alleged members of al-Qaida on charges of planning a bomb attack, though a specific target had not been decided. Their plan to build a shrapnel bomb was still in the “experimental phase,” prosecutors said.

Interior Minister Friedrich said the laws had been independently assessed and were being used responsibly.

“Two external experts have examined the existing anti-terror laws and come to the conclusion that the bulk of the provisions are sensible and are being applied by the authorities in a measured way,” he said. “I am against legislative activism but we don’t need party tactical manoeuvring, rather security and protection for our citizens from attacks,” he said.

“Someone like the federal justice minister who, at a time like this, is categorically ruling out options can only be ideologically motivated,” he told the Financial Times Deutschland. “The justice minister wants to make a name for herself as ‘Madam No’. When it comes to the security of the people, such behaviour is unsupportable.”

The centre-left opposition Social Democratic Party (SPD) actually supports an extension of the exceptional powers. The spokesman for their parliamentary wing, Thomas Oppermann, said on Monday: “The battle against terrorism is not yet won. To ask for the vigilance of citizens alone is not sufficient.”