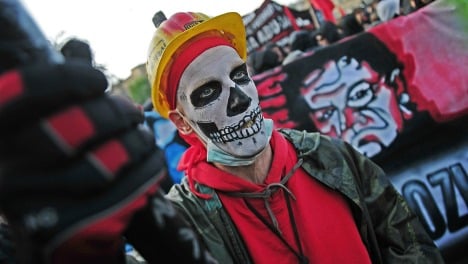 Rioters claiming to protest against rising rents threw bottles and stones at two banks and shops and set fire to waste containers. Police used water cannon to break up the mob but did not give a figure of those detained.

Evening clashes have become a regular feature of International Workers’ Day in Europe’s top economy but thousands of police were deployed in Berlin and Hamburg, Germany’s second city and biggest port, bracing for street violence.

On Sunday around 4,000 anti-fascists demonstrated against a far-right rally in the northern city of Bremen. Two police were mildly injured.

Last year, eight police officers and a fireman were injured in clashes in Berlin’s traditionally leftist Kreuzberg district as demonstrators torched cars and rubbish bins. In Hamburg, five policemen and a firefighter were also hurt.

Trade unions said more than 420,000 people rallied across Germany on Sunday for May 1.

“May 1 is not a public holiday. It is a day when we demonstrate for the rights of working people,” DGB head Michael Sommer, head of the trade union federation DGB, said at the main rally in Kassel, central Germany.

“Fair wages, decent work and social security is the minimum that workers in this country expect, need and have to fight for again and again,” he said, calling the rallies a “clear signal” to Chancellor Angela Merkel’s government.

Europe’s biggest economy has shown a strong rebound since suffering its worst postwar recession in 2009, recording growth of 3.6 percent in 2010 and unemployment currently at its lowest level in around 20 years.

This year, the government is forecasting growth of around 2.6 percent, thanks not only to Germany’s traditional export strength but also to buoyant domestic demand, outpacing European rivals like Britain and France.

Unions say however that employers are hiring more and more workers on temporary contracts with lower pay than permanent employees and less job security and other rights. They also want a blanket minimum wage.

Coincidentally, May 1 also saw Germany and Austria drop restrictions on workers from eight Eastern European countries that joined the European Union in 2004 after a seven-year “transition period” ended.

The DGB’s Sommer said foreign workers were welcome but warned that employers would make use of a lack of government oversight to hire workers from these countries and drive wages down.

“Unfortunately, there are enough employers in Germany hoping for cheap workers from the east,” the DGB’s Sommer said. “They want to misuse people from Central and Eastern Europe for wage dumping.”

Labour Minister Ursula von der Leyen said earlier she expected at least 100,000 people to come to Germany every year following the dropping of the restrictions.

She vowed a rise in checks to make sure that workers were being paid the minimum wage, where applicable, and that they were properly registered, and

said that those arriving would not be a drain on Germany’s welfare state.

“The vast majority will be young, educated and mobile workers,” she said.