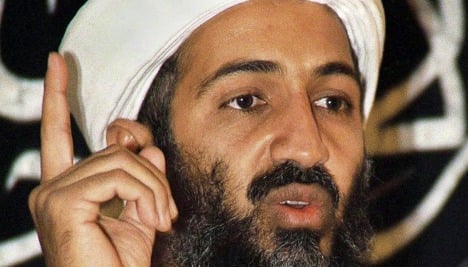 The US State Department warned of the “enhanced potential for anti-American violence,” following bin Laden’s death and placed its embassies and military installations around the world on high alert.

Germany has more than 20 American bases spread across the south of the country.

Bin Laden was killed in an operation led by US Navy SEALs early Sunday in Pakistan. Announced by Obama late Sunday evening, his demise follows the arrest of three alleged al-Qaida members late last week in the German state of North Rhine-Westphalia. Prosecutors say they were experimenting with building a shrapnel bomb designed to hurt as many people as possible in an attack.

Chancellor Angela Merkel hailed the death of the al-Qaida leader and mastermind of the September 11, 2001 attacks on New York and Washington as “a decisive blow” against terrorism.

“On his direct orders and in his name, terrorism was carried out in many countries, directed against men, women and children, Christians and Muslims,” she said in a statement.

The killing bin Laden was a “victory for the forces of peace,” but his death did not mean extremism has been defeated, Merkel said.

“Last night the forces of peace achieved a victory. But this does not mean that international terrorism has been defeated yet. We must all remain vigilant.”

Foreign Minister Guido Westerwelle said: “Osama bin Laden was one of the world’s most brutal terrorists. He has the lives of thousands of innocent people on his conscience. It is good news for all the people of the world who love peace and think freely that the bloody work of this terrorist has been stopped.”

Bavaria’s Interior Minister, Joachim Herrmann, said the security of US facilities would be reviewed in the southern state.

“The danger of acts of revenge by Islamist attackers is growing,” he said.

The protection of American facilities in Bavaria would therefore be strengthened, in consultation with the US.

Federal Interior Minister Hans-Peter Friedrich said the threat of terrorist attacks in Germany persisted despite bin Laden’s death. It was premature to think “that terrorism therefore has ended,” he said, ahead of a trip to Washington.

He stressed there was no evidence of “an elevated danger” for American facilities in Germany. That said, it was self-evident that security measures would be raised.

The GdP police union called for the “highest vigilance” after the announcement. “It cannot be ruled out that the various terror networks want to avenge the death of bin Laden,” GdP chairman Bernhard Witthaut said in Berlin. “For this reason the German security services need every political and legal support to be able to carry out their work for the security of the people.

“The death of bin Laden will not defuse the danger of terrorism for Germany. The background of the latest arrests by the Federal Criminal Police show that.

“The terror network originally founded by bin Laden has long functioned in a decentralized way. There are groups operation in many countries as the latest bomb attack in Marrakesh and the arrests in Düsseldorf and Bochum indicate.”

German prosecutors said at the weekend that one of the three men arrested in North Rhine-Westphalia – named only as Abdeladim K. – had received the order to plan an attack in Germany from an important member of al-Qaida last year.

The 29-year-old from Morocco is said to have been in regular contact with the al-Qaida man, who is in the Afghan-Pakistan border region.

The other two men arrested were identified as 31-year-old Jamil S., a German-Moroccan, and 19-year-old Amid C., a German-Iranian.