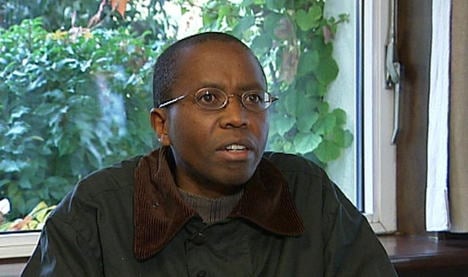 In the dock in the southwestern German city of Stuttgart are Ignace Murwanashyaka, 47, the head of the “terrorist” Democratic Forces for the Liberation of Rwanda (FDLR), and his deputy Straton Musoni, 49.

A resident of Germany for two decades, Murwanashyaka studied in the western city of Bonn and was afforded asylum, settling in Mannheim in the southwest and marrying a German woman.

Before their arrest in November 2009, the two ordered mass killings and rapes from Germany together with a third man living in France who has been extradited to the International Criminal Court (ICC), prosecutors say.

They will face 26 counts of crimes against humanity and 39 counts of war crimes committed by militias under their command between January 2008 and the date of their arrest.

The United Nations has hailed the coming trial as a breakthrough after repeated calls by the Security Council to bring FDLR commanders living abroad to justice and to bar them from unleashing further violence in the strife-wracked eastern DRC.

“Legal action against FDLR leaders also reinforces efforts to demobilize and repatriate FDLR fighters, which would significantly contribute to stabilizing the eastern DRC.”

Prosecutors say Murwananshyaka ordered around 200 killings and “large numbers” of rapes by his militias, had them use civilians as “human shields” and sent child soldiers into battle in eastern DRC.

“I am the president and… the supreme commander” of the FDLR, “I know exactly what is happening” on the ground, he told German media in interviews in 2008 and 2009.

A UN report counted 240 telephone calls between Murwananshyaka, known as the “The Doctor” for his PhD in economics, and his officers during the same period.

A protégé of former DRC president Laurent-Desire Kabila, Murwananshyaka also paid occasional visits to his troops in the country’s dense forests, according to the UN.

At the time of their arrest, the rebel group said that the two were “in no way involved in the atrocities committed against civilians in eastern DRC,” calling their detention “unfair and unjustified.”

The trial is to run until at least July.

The FDLR was created by the perpetrators of the 1994 Rwandan genocide, who fled to neighbouring DRC after President Paul Kagame took power.

Its around 5,000 Hutu fighters are seen as a major source of instability in Africa’s resource-rich Great Lakes region.

Kagame has criticised Western countries in the past for not doing enough to bring FDLR leaders to justice, and the UN mission in DRC, known as MONUSCO, has called on other countries to follow the example set by France and Germany.

Murwanashyaka, head of the FDLR since 2001, was among 15 people whose assets were frozen by the Security Council in 2005 on suspicion of involvement in war crimes.

He had been arrested but later released in Germany in 2006 due to a lack of witnesses for the prosecution. Germany declined a request to extradite him to Rwanda in 2008 but later launched another inquiry.

Prosecutors said they questioned witnesses in Africa “in very difficult conditions” with the aid of the UN and non-governmental organisations.

The trial of a former mayor, Onesphore Rwabukombe, started in January in Germany, hearing charges that he ordered and organised the killing of at least 3,730 Tutsis who had sought refuge in church buildings during the Rwandan genocide.

An estimated 800,000 people, mostly ethnic Tutsis, were killed in the mass murder.