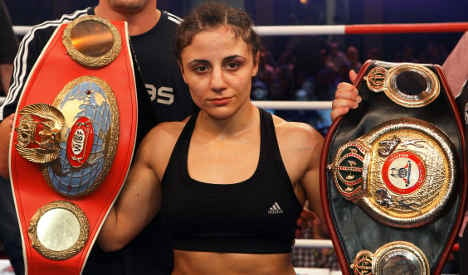 The bars of cake with a sweetened cream filling were long advertised using the boxing brothers Vitali and Vladimir Klitschko, but a new campaign has been launched with Susi Kentikian, women’s boxing world champion, and the extreme climbers Alexander and Thomas Huberbaum.

Yet linking the sweet snack with sport, and the advertising slogan, “Tastes light. Doesn’t weigh you down. Ideal for in between,” is misleading, says campaign group Foodwatch.

“Compared with Milch-Schnitte, chocolate-cream cake is a diet miracle – it has generally fewer calories, less sugar and less fat,” says a statement on the group’s website.

The group also takes on the statement, “Recommended for between meals,” which comes, according to the slogan on the packaging, from the Institute for Sports Nutrition in Bad Nauheim.

The website www.milchschnitte.de, which promotes the product, says it was created in cooperation with the institute. Yet when Foodwatch called the Institute for a comment, it received no answer.

“Why would the creation of a product website belong to the remit of a research institute?” the Foodwatch statement asks.

It calls on consumers to send questions about the nutritional value of Ferrero products to the company. Ferrero would not reply to Foodwatch’s questions on Milch-Schnitte, but, according to news magazine Der Spiegel’s website, it said it used sports personalities as advertising partners in order to create the impression, “that nutrition and movement belong together.”

In principle, there is no conflict between, “the consumption of a Milch-Schnitte as a between-meals snack and a balanced, sporty lifestyle,” it said.