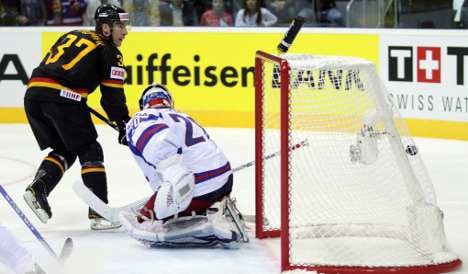 The victory in Bratislava was also sweet revenge for the German loss to the Russians in last year’s semi-finals.

In Kosice where Group B is based, Olympic champions Canada got off to a winning start, easing to a 4-1 triumph over Belarus.

But it was Germany’s superb performance that took the eye and certainly pleased their manager.

“Our players executed the game plan perfectly, and we had good goaltending,” Uwe Krupp said.

“It was a day when just about everything worked in our favour.”

Forward Thomas Grelinger put Germany into the lead 4:19 into the second period, beating Russia’s keeper Yevgeny Nabokov with a precise unopposed wrist shot after a Russian mix-up in defence.

Russia poured into attack trying to level, but were making too many unforced errors, while Germany defended well replying on the counter-attack to keep their narrow lead throughout the second period.

In the third period, Russia tried to take Germany’s goal by storm but German keeper Dennis Endras played at his best producing 31 saves to win the Player of the Match title.

Striker Patrick Reimer made it 2-0, scoring on a breakaway with 2:07 remaining, to secure his team’s well-deserved win.

“We played hard for 60 minutes,” Endras said. “I think we were the better team in the first 40 minutes. We tightened up our gaps and they didn’t have much room.”

Belarus levelled with just 34 seconds remaining before the first intermission through Andrei Stepanov, who swept the puck home from close range.

Carolina Hurricanes striker Jeff Skinner restored Canada’s lead 10:27 into the second firing the puck in from just outside the crease, while New York Islanders John Tavares made it 3-1 for Canada 5:18 into the third.

Eberle netted his second of the match at 48:39 on power play to wrap up the scoring.

In the late Group A match, hosts Slovakia, who are keen to repeat their world title heroics of 2002, came back from a goal down to beat Slovenia 3-1.

The Slovaks seized the initiative from the start to outshoot Slovenia 14-5 in the first period but with no immediate reward.

Indeed it was promoted Slovenia who grabbed the lead 2:37 into the second on power play through Ales Kranjc, who beat the Slovakia defence on a breakaway to send the puck home between Jaroslav Halak’s pads.

Slovakia continued peppering Slovenia’s keeper Robert Kristan with shots and Miroslav Satan levelled with 4:44 remaining before the second interval, wristing the puck under the crossbar.

Defender Peter Podhradsky put the hosts into the lead with a powerful slap shot 7:03 into the third, while Lubos Bartecko rounded off the scoring with his empty-netter with eight seconds remaining.