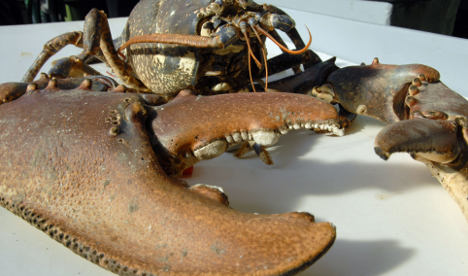 A meeting of the state consumer authorities will next week decide on a submission from Bavaria which recommends lobsters are no longer kept in such small tanks, and that their claws are no longer bound.

“The frequent practice of binding the claws might prevent cannibalism, but makes their natural behaviour impossible,” the submission says.

All animals must be fed, cared for and held in a manner suited to them, it continues.

Because the crustaceans are not vertebrates, they are not covered by other animal welfare laws.

The recommendation is for eight lobsters to be kept in at least 300 litres of water. “Then dealers would probably have to keep the lobsters in big tanks, singly and without bound claws,” said Roland Schütz, spokesman for the North Rhine-Westphalia state consumer ministry.

He stressed that the paper was only a suggestion, although if adopted, it could become law quickly.

Yet it would seem a change could be coming. The Bavarian submission takes more account of the biology of the lobsters and their ability to feel pain, according to Roland Otto, from the Münster veterinary office, where attempts have previously been made to improve the law protecting lobsters.

The German Animal Protection League welcomed the suggestion as a move in the right direction, but said that lobsters should not be sold alive.

There is no reason not to sell lobster meat deep frozen, cutting out the need to keep them alive in poor conditions, said Marius Tünte, the league’s spokesman.