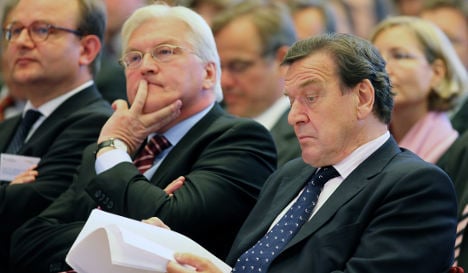 The decision to investigate the allegations was made on Friday, according to the Frankfurter Allgemeine Zeitung.

Steinmeier was head of Schröder’s state chancellery in Lower Saxony in 1998 when the then state premier was running for election to national chancellor.

Steinmeier is said to have known of a 150,000-Deutschmark donation from Carsten Maschmeyer, founder of the AWD finance services firm, which was used to pay for three full-page adverts in support of Schröder’s election campaign.

The donation was not published, and was paid via a third party while efforts seem to have been made to ensure that Maschmeyer remain anonymous.

Bettina Raddatz, then member of the state chancellery staff has admitted breaking the election law which strictly separates administrative and party political activity, by helping to organise the secret donation, said the FAZ.

She has said she sent a message in the summer of 1998 to Matthias Machnig, who was the SPD election campaign manager, about the donation, which was intended only for the newspaper adverts. The adverts were from the ‘Trade and Small Businesses for Gerhard Schröder’ voters’ initiative.

Her message, which was also sent to the head of the chancellery, included a note asking Steinmeier to ensure that Schröder should also know that the donor wanted absolutely to remain anonymous.

The note was signed with the initials FWS, which was usually used by Steinmeier.

He would not comment on the matter when asked about it on Friday, but has written to the state television channel ARD, which has reported on it, that he knew of no foul play.

He said he would not be surprised if the small businesses initiative had sought contact to the relevant expert in the state chancellery – which would have been Raddatz.

“If activities resulted which bordered on election campaign support, then it was naturally only on the condition that such political activity took place outside of the official responsibility of that member of staff,” he wrote, according to the FAZ on Saturday.

“Whether any money was transferred at all, from whom and to whom,” would be outside his knowledge, he said. “I also did not know at the time that Mr Maschmeyer was hidden…. behind the support action.”

The parliamentary investigation must now decide whether the money was a hidden party donation – as it should have been registered if it was given to the party, which the note to Machnig would indicate. He is now economics minister in Thuringia.

If the money was donated to a voters’ initiative, then it would not have been necessary to publish the donor’s name, the FAZ said.

The case could become a problem for Steinmeier even if there is no legal consequence as should something tangible come from it, it would damage his political credibility. Steinmeier’s political capital depends greatly on his seriousness, wrote the Neue Presse newspaper, which is based in the Lower Saxony state capital Hannover.

AWD has repeatedly been accused of recommending tens of thousands of investors to buy high-risk real estate fund shares without sufficiently warning of the risks, making Maschmeyer a controversial figure.

He has been a long-term personal friend as well as political supporter of Schröder, while the current AWD spokesman is Bela Anda who was government spokesman while Schröder was chancellor.