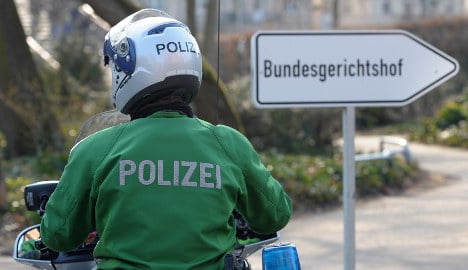 The prosecutor’s office in the southwestern city of Karlsruhe said the trio had been taken into custody early Friday and would appear before a judge Saturday, when a news conference has been scheduled.

It declined to provide further details.

The daily Bild reported that the three were Moroccans living in the western German state of North Rhine-Westphalia and were caught with “large amounts of explosives”.

Citing security sources, the newspaper said they were suspected of plotting attacks in Germany. One possibility was that they were targeting the Eurovision Song Contest in Düsseldorf on May 14, the paper reported.

They came to the attention of the Federal Crime Office during surveillance of mobile phone and computer communications.

The Moroccan government said Friday that al-Qaida was suspected in connection with a bomb attack Thursday that killed 16 in Marrakesh.

German authorities hiked security measures in November after US authorities warned of an al-Qaida plot to carry out “Mumbai-style” attacks in Britain, France and Germany.

US authorities handed over to Germany last week the source of the tip, alleged Islamic militant Ahmed Wali Siddiqui, who had been held for nine months in Afghanistan.

According to German media, Siddiqui met with al-Qaida’s third in command, Sheikh Yunis al-Mauretani, who initiated him into a plot to carry out attacks in Europe similar to those in the Indian city of Mumbai in 2008 in which 10 gunmen killed 166 people and injured more than 300.

The interior ministry announced in February that the state of alert would gradually be scaled back.

Germany, which opposed the 2003 US-led invasion of Iraq but has nearly 5,000 troops in Afghanistan under NATO command, has never experienced an attack by Muslim extremists on its own soil.

But authorities say the Islamist scene is large and dangerous.

The closest it has come to an attack was in July 2006 when Islamic militants placed suitcases with homemade bombs on two regional trains at Cologne’s main station. They failed to detonate, averting an almost certain bloodbath.

And in 2007, three men including two German converts to Islam were caught plotting attacks on US interests in western Germany in what authorities said was a bid to mount a “second September 11.”

They were sentenced last year to lengthy prison terms.