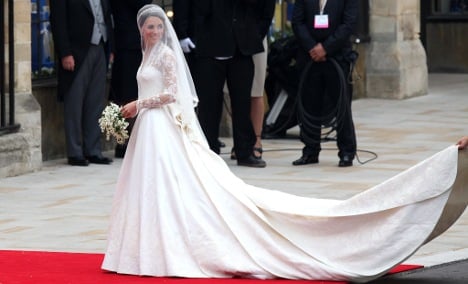 Commenting on the ceremony for French television, Lagerfeld compared the dress favourably to the one worn at a previous royal wedding: “It’s a bridal gown of very refined detail, much more refined than the one Diana wore.”

“Alexander McQueen’s dresses are always very elegant. It’s very pretty, and relatively classic, but that goes with the decor, with a little touch of the 1950s that recalls Marilyn Monroe or Queen Elizabeth II’s dress.

“The lace is pretty, especially the embroidered veil and the tiara not too high, without too heavy a bun. It’s ravishing and the length of the train is perfect,” he continued.

“It’s all elegant and chic – you don’t need to be born a royal princess to be like that,” he declared, comparing the young bride to a troubled but stylish Hollywood starlet.

“Kate is a young, modern woman. She’s a Lindsay Lohan and she wasn’t going to miss her moment,” he said.

Lagerfeld was tight-lipped about the Queen’s canary yellow coat dress and matching hat, and praised her consort the Duke of Edinburgh for wearing his uniform: “Whatever you say, it’s better than an ugly suit.”

But, if the famous designer was generally enthusiastic about the “magnificent and magical spectacle”, he was a little less generous in his views on some of the outfits worn by less famous guests in Westminster Abbey.

Referring to one woman who wore a hat with an enormous brim that obscured her from view, he burst out: “Why, it’s the headless woman.”

And, upon seeing a guest wearing a coat in a rough fabric that resembled upholstery, he exclaimed: “She’s wearing a sofa on her back!”

Burton took over as creative director at the label after McQueen committed suicide in February 2010. The 36-year-old graduate of London’s Central St Martin’s fashion school had worked side by side with him for 14 years.