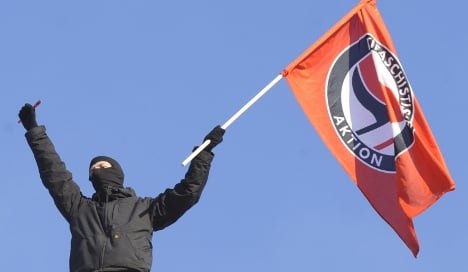 The conservative parliamentary group’s spokesman on interior affairs, Hans-Peter Uhl of the Bavarian Christian Social Union, told the Neue Osnabrücker Zeitung that the left-leaning Berlin government was letting left-wing extremists get away with violence unchallenged on the traditional workers’ day.

May 1, or May Day as it is known, has in the past degenerated into battles between activists and police. This year is expected to be particularly volatile because authorities have angered left-wing extremists by clearing out a squat in January.

“Troublemakers known to the police have to be detained as a prevention for an appropriate length of time before May 1,” Uhl said.

Recidivist rioters deserved not freedom of assembly but rather handcuffs and jail, he said.

Uhl accused the Berlin government of letting left-wing extremists thumb their noses at authorities for years.

“Rioting must not become something that’s trivialized as a kind of Berlin folklore,” he said.

The fact that violent extremists were able to carry out their criminal activities unchallenged damaged the image of the nation’s capital and thereby the whole country, he said.

Preventative custody was legally possible in Berlin for up to two days, he said.

Also the city should toughen the laws to help police dealing with violent crowds. In the southern states of Bavaria and Baden-Württemberg, preventative detention was allowable for up to 14 days.