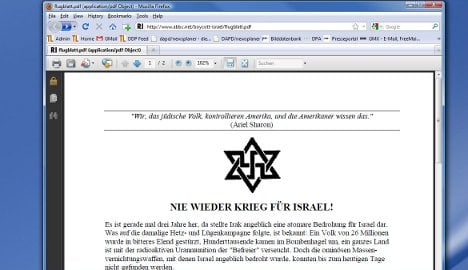 Photo: A screenshot of the pamphlet.

Duisburg District Attorney Rolf Haferkamp said authorities were probing the possible criminal use of unconstitutional symbols. Germany has strong hate-speech laws which generally forbid anti-Semitic literature or the use of swastikas in propaganda.

The document, which The Left party has since has disavowed, was discovered on the homepage of the party’s Duisburg branch this week. It featured a Jewish star of David with a swastika inside of it. The leaflet denied the holocaust, called for a boycott on Israeli goods and vilified Israel as a “true rogue state with warmongers.”

Hans-Werner Rook, spokesman for The Left, said he didn’t know how the leaflet got on the website and said party officials were searching for its author. The link was taken down as soon it was discovered.

“We are totally outraged. That’s all far-right radical nonsense,” said Rook, speculating that an extremist mole burrowed himself into the party and posted the flyer onto the website.

The pamphlet was first reported on by regional blog Ruhrbarone, which said it had apparently been available for download for years.

The Left’s Duisburg chapter has a history of causing a stir with its strident views on Israel. In 2009, the party’s mayoral candidate resigned after he supported a boycott of the country.