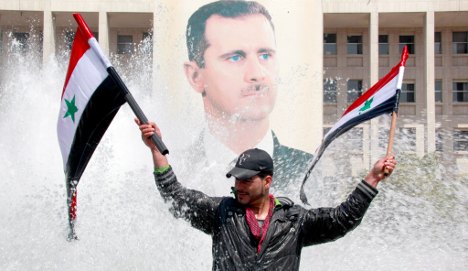 “It is being examined, also based on a German initiative, whether it is possible to agree EU sanctions against the Syrian leadership,” he said. “We would strongly support such sanctions.”

Seibert said measures could include restricting the travel of top Syrian officials and seizing their assets, as well as cutting off economic assistance from the EU.

Foreign Ministry spokesman Andreas Peschke said that Germany had called a meeting Friday in Brussels to discuss possible EU punitive measures against Syria and would unveil its own concrete proposals for sanctions.

Seibert said Berlin also welcomed the UN Security Council’s decision to take up the issue of the unrest in Syria.

Germany, which is a non-permanent member of the council, would also oppose Syria joining the UN Human Rights Council when the General Assembly elects new members next month, Seibert said.

He renewed a call for President Bashar al-Assad to implement promised democratic reforms and bring those responsible for the violence against unarmed demonstrators to justice.

Britain said Tuesday it was working with Washington and the EU to send a “strong signal” to Syria including sanctions. And France’s foreign ministry said that Paris was urging the UN and the EU to take “strong measures” against Syria to halt the violence.

Diplomats said Monday that Britain, France, Germany and Portugal were seeking a UN Security Council condemnation of the killing of hundreds of demonstrators in Syria and a call for an independent investigation.