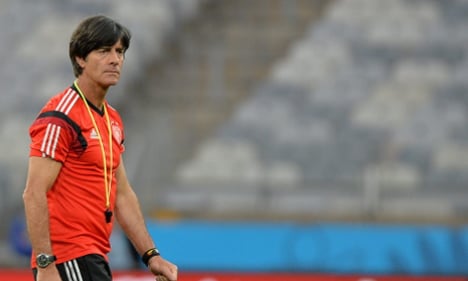 The popular mop-haired, married coach was asked by daily Die Welt this week how he felt about being “grouped with the gay half” of the national football team.

In a less-than-subtle questioning technique, Die Welt pondered why it was that so many footballers’ sexuality was a matter of speculation when sports such as handball and synchronised swimming attracted no such interest.

The paper then asked how Löw felt about the speculation surrounding himself, given he was considered a snappy dresser.

“I’ve heard that before,” said Löw, who is normally guarded about his private life. “What can I say about it? It’s like with the toupee – that’s also untrue. Feel free to ask my wife.”

The toupee reference referred to rumours his undeniably impressive head of hair was really a wig, another subject of fascination in Germany. There is even a Facebook page dedicated to the coach’s hip mop of thick black hair.

“I’ve heard that before too. Rubbish. You’re welcome to tug on it. There is so much mischief made. I suppose it’s part of my job.”

The interviewer took him up on the offer and declared it real.

Löw has led the young German team to strong performances, finishing third in the 2010 World Cup and holding a 100 percent win record in qualifiers for next year's Euro 2012 competition.

He last year signed a contract that will keep him with Germany until 2014.