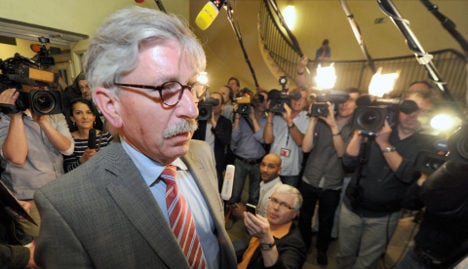 Prominent Social Democratic Party (SPD) politicians across the country have begun to air their deep dissatisfaction over the party leadership’s decision, announced last Thursday, to abandon expulsion proceedings against the former Bundesbank board member and Berlin finance minister.

Sarrazin has carved out a new career for himself as an outspoken critic of Islam and immigration. He has warned both in a best-selling book and in regular commentary that Muslim immigrants are in danger of dragging Germany down.

“The solid relationship we have painstakingly built with the immigrant community is threatening to come apart,” the party’s chief in the state of Baden-Württemberg, Nils Schmid, told news magazine Der Spiegel on Tuesday.

“The meagre (party) statement is unsatisfactory. His biological claptrap was the basis of our accusation that he was behaving in a way that damaged the party. He has not distanced himself from that.”

SPD Berlin head Michael Müller told reporters he had hoped for a “clear and unambiguous judgement.”

Bundestag MP Ernst Dieter Rossmann warned in the Passauer Neue Presse that Sarrazin must not be allowed “the freedom to do whatever he wants.”

Sergey Lagodinsky, founder of the Working Group of Jewish Social Democrats, announced he was quitting the party in protest, according to the Süddeutsche Zeitung. In a letter to SPD general secretary Andrea Nahles he wrote that “as a Jewish person” he had seen the possibility “to revive the long tradition of Jews in Germany, together with other minorities and the majority in our country.”

This hope was however now dashed, he wrote.

Sarrazin himself described the decision as a “victory for common sense.” He had insisted he did not mean to breach any basic social democratic principles not discriminate against any migrant.

The leadership group will on Tuesday hold a special meeting to discuss the backlash.