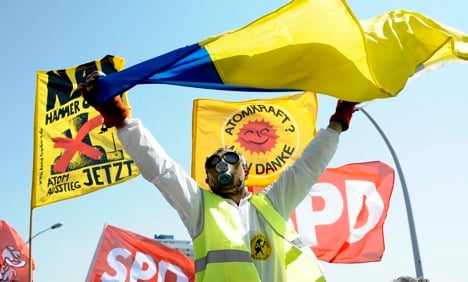 Between 6,000 and 9,000 people took to different bridges on the Rhine River between Germany and France, with the main Easter Monday demonstration involving hundreds in a so-called “die in” at Strasbourg.

The protest at the midway point on the Pont de l’Europe joining Strasbourg in eastern France and Kehl in Germany aimed to show that “radioactivity knows no borders,” said organiser Remi Verdet.

“We’re here to remind people that zero risk does not exist,” he said.

Ukraine on April 26, 1986 and Japan’s ongoing meltdown at Fukushima were also aimed at getting France, proportionally the world’s biggest user of nuclear power, to shut ageing plants.

Protesters carrying Japanese and Ukrainian flags dropped to the tarmac as sirens wailed for the “die in” before they threw flowers into the Rhine in memory of those killed by nuclear accidents.

A powerful March 11 earthquake followed by a giant tsunami cut the electricity to Fukushima’s nuclear reactors, shutting down the cooling system and leading to the world’s worst nuclear crisis since Chernobyl.

Protesters’ demands were focused on getting France to shut its oldest nuclear power station at Fessenheim.

In service since 1977, the Fessenheim plant lies in a densely populated part of France, less than two kilometres from Germany and around 40 kilometres (25 miles) from Switzerland.

Around 2,000 people, including many Germans and Luxembourgeois, also protested at the Cattenom atomic plant, France’s second most powerful, in the Mosel region to the northwest of Strasbourg, officials said.

More than 100,000 demonstrators staged nationwide protests in Germany on Monday, calling for an end to nuclear power as part of the traditional Easter March.

A total of 144,500 protesters took part in demonstrations at 12 different sites, organisers said. Police did not give an estimate on numbers of participants.

“It’s not enough to declare a moratorium and hope that satisfies people,” said Jochen Stay, spokesman for anti-nuclear group Ausgestrahlt.

The German government imposed a three-month moratorium on extending the lifespans of the nation’s nuclear reactors following the Fukushima disaster. Just last year Chancellor Angela Merkel granted 12-year extensions to the country’s nuclear reactors, which produce about a quarter of Germany’s electricity.

Protests also took place in Berlin and Hamburg on Saturday as part of the Easter March, an annual peace protest which enjoyed massive popularity during the Cold War, when up to 300,000 people demonstrated each year against nuclear weapons.