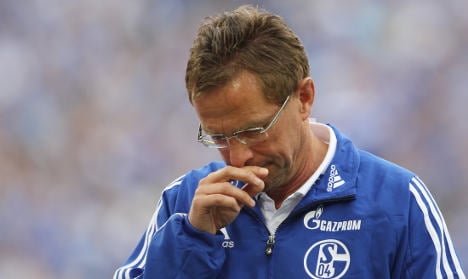 Schalke hopes of a morale-boosting win were dashed when they were forced to swallow a 1-0 home defeat to Kaiserslautern.

Neuer had told the Royal Blues on Wednesday he would not renew his contract which expires at the end of next season.

Looking towards the visit by United, Rangnick is expected to revert largely to the side which beat holders Inter Milan 2-1 in Gelsenkirchen in the quarter-finals on April 13.

Spanish play-maker Jose Jurado is expected to start, as will defender Benedikt Hoewedes – who scored the winning goal against Inter – after sitting out Saturday’s defeat with an injury.

The midfield of Greece’s Kyriakos Papadopoulos, Germany’s Joel Matip, Alexander Baumjohann and Spain’s Jurado is expected to line up again to face United after Rangnick had tried out a totally different quartet against Kaiserslautern.

“I selected the team in such a way, because I wanted to win both of our games (against Kaiserslautern and Manchester United),” said Rangnick.

“In the Champions League, we will select a different starting eleven again.”

But despite his bluster, Rangnick could not hide his disappointment with the defeat.

“If you look at the entire 90 minutes, we had the better chances,” said Rangnick.

“But unlike Kaiserslautern, we did not use our possibilities.

“I am not dissatisfied with the defeat. The team put in a decent performance, this was the first time this particular team has played together, which has to be taken into consideration.”

Meanwhile, Schalke’s bosses are also set to sit down with veteran striker Raul, 33, who is is enjoying a stellar season. They want to talk about an extension to his contract which runs until 2012.

“We had a first meeting with his agent around the first game against Inter and there will be a further meeting around the United game,” said Schalke’s director of sport Horst Heldt.

“We would love to have him play another few seasons with us – that would make us proud.

“He is an honest man and must be handled with respect.

“We are grateful that he is with us, he is world class and humble, even though he has achieved nearly everything in football.”