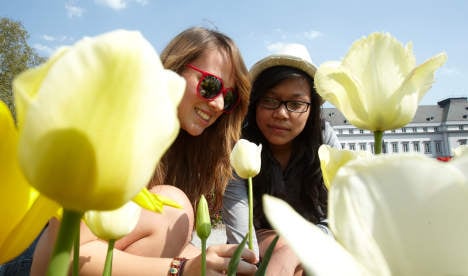 “People on the holiday beaches of the Mediterranean are having between 14 and 24 degrees and are looking jealously towards Germany,” said Christoph Hartmann from the German Weather Service (DWD) on Saturday.

It was raining hard on Friday in Cyprus, Ibiza and Menorca, he said.

The warmest spot in Germany so far this Easter holiday weekend has been near Duisburg where the temperature climbed to 27.6 degrees on Friday.

Next week will be less exciting for sunshine enthusiasts with cooler temperatures and more rain likely.

The brilliant weather over the last few days has helped to attract visitors to the Federal Garden Show in Koblenz where 136,000 people passed through the doors in the first week.

“That is a great start,” said a spokeswoman for the show. Many visitors were from the region, but the spectacular show of flowers has also brought people from further away – 23,300 altogether on Friday alone.