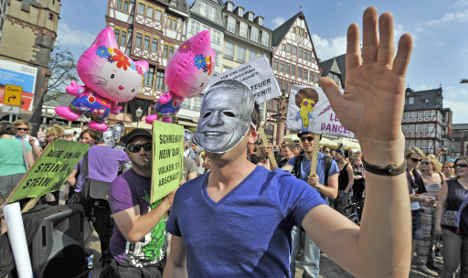 A number of German states still have laws which ban public dancing on a number of important Christian holidays, including Hesse, where a number of club owners protested this year.

The youth organisation of the state’s Green Party called for the Frankfurt dance in a Facebook flashmob notice.

Police said around 1,000 people showed up at the Römerberg in front of the city hall, most of them as suggested, with their own MP3 players, so passersby were treated to the sight of a big group of silent dancers.

“It is not the job of the state to secure the observation of Christian rites. Frankfurt city is referring to the Hessian holidays law. This must be modernised as soon as possible,” said Ouasima Chami and Benjamin Weiß, joint chairs of the Hesse Young Greens in a statement.

But Roger Töpelmann, spokesman for the Evangelical Church in Hesse and Nassau said Good Friday served to direct attention to the suffering in the world, including the latest horrors in Fukushima and Libya.

These thoughts do not fit with the idea that, “every citizen should be allowed to express themselves freely.”

He said Hesse was a, “Christian-western oriented” state and that thus it was, “important and correct that there is no rock around the clock on the most important Christian holidays of the year.”

Some of the dancers on the Römerberg were wearing masks of his face.