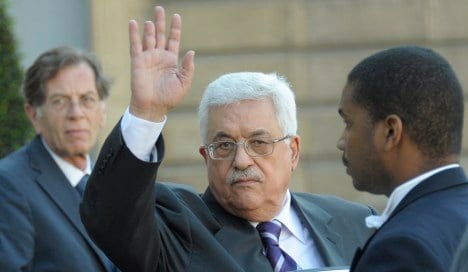 The meeting would take place “at the invitation of the chancellor” in the context of Germany’s interaction with all parties to the Middle East peace process, a government spokeswoman said, declining to specify the discussion points on the agenda.

Der Spiegel magazine said the talks would see Merkel explaining why she thinks it ill-advised for Abbas to push for recognition of a Palestinian state at a UN General Assembly meeting in New York in September.

The international community has set September as a target date for the creation of a Palestinian state, but the timeline is threatened by heightened Palestinian-Israeli hostilities and a US block on European attempts to break the deadlock.

“We are impatient to see what the Germans have to propose,” the Palestinians’ envoy to Germany Salah Abdel Shafi told Der Spiegel.

Earlier this month, Merkel received Israeli Prime Minister Benjamin Netanyahu in Berlin, saying, “We feel that there should, and there could, be progress made by the autumn, by September 2011”.

She also stressed that Germany would not unilaterally recognise a Palestinian state.

Abbas met President Nicolas Sarkozy in Paris on Thursday, as French ambassador Gerard Araud told the UN Security Council in New York that his country, with the rest of Europe, was considering recognition of a Palestinian state “with a view to creating a political horizon for re-launching the peace process”.