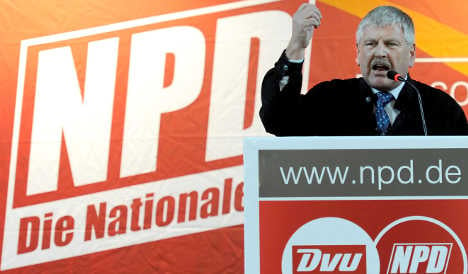 Referring to expectations of far-right trouble across the country on May 1, Dieter Graumann, president of the council, warned of an increasing political and social acceptance of the party.

“Sadly, the announced actions of the neo-Nazi scene for May 1 already practically belong to the sad events calendar of any given year,” he said.

He called for society to never get used to such things and for politicians to take their duties more seriously – and try again for a ban of the NPD – “instead of barricading themselves over-cautiously behind legal sophistry and avoiding the confrontation.”

“Those who bury their heads in the sand too timidly can only gain an overview with great difficulty. A strategy against the rightwing charlatans and enemies of our democracy looks different to this,” he said.

Referring to an incident in Winterbach in Baden-Württemberg on April 10, when a group of neo-Nazis set fire to a house in which five foreigners were living, he said, “Such attacks plumb the tragic depths, but it is about more than single attacks against foreigners or other minorities. Far right extremism does not start when the first blood flows.”

Public discrimination and defamation are also not to be tolerated, he said, adding that he found some recent court decisions which seemed to give fascists the right to spread what he called their poison, unbelievably damaging to society.

“We have to draw a line here and make clear what we in our society, which has a broad consensus which overcomes political and religious differences of opinion, will not accept,” he said.

He called on churches and religious communities, in particular Muslim associations, to, “step up much more clearly and convincingly,” on the matter. The attack in Baden-Württemberg showed that, “xenophobia, racism and discrimination are problems for all of Germany and all of society,” he said.

He added that a sense of citizenship and social engagement must be, “fostered and won every day and for every generation.”

Times of economic difficulties in particular meant that, “many people are obviously receptive to populist, defamatory and xenophobic theories,” he warned.