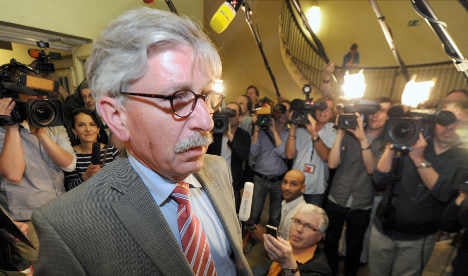 Sarrazin saved himself from the ignomy of being expelled from the party of which he has been a member since 1973, with a three-point letter promising that he was not racist or discriminatory and that he had not meant to bring the party into disrepute.

Sarrazin, has reportedly earned millions with his book Deutschland schafft sich ab – Wie wir unser Land aufs Spiel setzen or “Abolishing Germany – How we’re putting our country at jeopardy.” In it he talked about uneducated immigrants and family sizes and culture clashes in Germany, touching upon a host of hypersensitive socio-political topics.

The vast media attention garnered by the book and his unrepentant manner prompted a host of SPD members and groups to seek his expulsion, a hearing on which started on Thursday afternoon and lasted for around five hours.

Applications to throw him out had been submitted by his party chapter for the Berlin district of Charlottenburg, the Berlin state party and the federal party, as well as a chapter in Frankfurt. The formal accusation was that he had damaged the party with his theories.

He had never called for a selective population policy, he said, nor propagated the idea that only women with academic careers or other socially-respected positions, from a particular nationality or religion should be the only ones granted benefits for having children.

He also promised that in the future when at public discussions, he would not put his social democratic values under question nor allow them to be questioned by others.

Ralf Stegner, member of the SPD’s presidium said he was disappointed with the decision to allow Sarrazin to remain in the party, but would accept it.

“What remains unacceptable is the intolerant guff with which Thilo Sarrazin has recently earned a lot of money,” Stegner told Der Spiegel website.

“His crude theory of inheritance and the education and integration nonsense have nothing in common with social democratic conviction,” he said.

Sybille Uken, chair of the Charlottenburg district party’s arbitration committee who made the decision, said the meeting had been constructive and respectful.

“We agreed that we as the SPD will not allow ourselves to be divided – not by interpretations from outside,” she said.