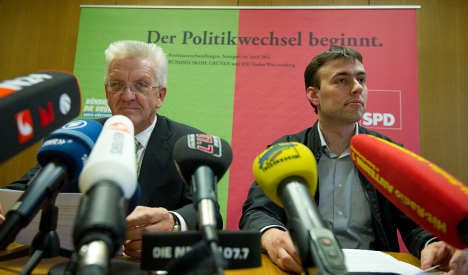 Green and Social Democratic (SPD) politicians reached the decision after three rounds of talks which had started off with the two sides at diametrically opposed positions – the SPD wanted to go ahead with the project but the Greens opposed it altogether.

The parties had to reach agreement on the project as opposition to it was a major reason behind their massive election victory last month in the southwestern German state. The previous conservative government had been determined to push the project through in the face of heart-felt local opposition and repeated mass demonstrations.

Now the new centre-left coalition, which will be led by the Greens, has decided that the price cap must be absolute – should costs rise above it, any extra must be met by others involved in the project, including Deutsche Bahn.

Yet first a referendum will be held – probably in October – as long as the price cap is not exceeded before then. The vote will concern the state’s participation in the reconstruction of the Stuttgart main station – not the new rail link between Wendlingen and Ulm.

Because the Greens had initially opposed the referendum, saying the current state rules prevented a fair vote, the state constitution will now be changed to reduce the size of the minimum quorum needed for a vote to be valid. This change in the constitution will itself need a vote of at least two-thirds of the state parliament.

Should this not work, the group ‘More Democracy’ has called on the state government to implement the wishes of a simple majority of the citizens. “This is legally possible and politically required,” said spokesman Ralf-Uwe Beck.

Winfried Kretschmann, who led negotiations for the Greens and is set to become state premier when the government formally takes office, said he would accept the result of a referendum even if the vote was not enough to fulfill the quorum requirements.

Nils Schmid, head of the SPD in Baden-Württemberg, said the agreement was a breakthrough.

Opposition parties were less than impressed, with the Free Democrats’ leader Hans-Ulrich Rülke describing the agreement as just a truce.

“The Greens cannot tell their supporters that Stuttgart 21 has been stopped,” he said. Rather they have been forced by the SPD to embark on what he called a legally questionable process to hold a referendum.

Negotiations for a coalition agreement between the Greens and SPD will now be able to continue, with a contract expected to be finalized on April 27.