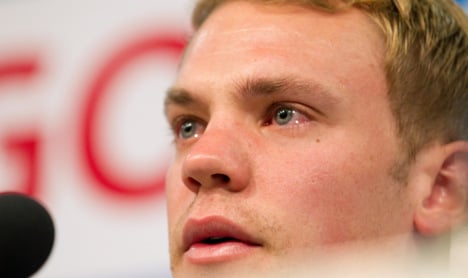 The 25-year-old has been with the Royal Blues since 1991, having supported the club as a boy, and said he wants to quit the Gelsenkirchen-based club to further his career.

German champions Bayern Munich have expressed an interest in signing the national team’s goalkeeper, but Neuer says he just wants to focus now on helping his team win silverware.

Schalke host Premier League giants Manchester United in their Champions League semi-final first leg on Tuesday and face Duisburg in the German Cup final at Berlin’s Olympic Stadium on May 21.

A red-faced Neuer cried throughout Wednesday’s press conference as he explained his decision and said he expects a hostile reception from Schalke’s fans when his team host Kaiserslautern on Saturday at the Veltins Arena.

“This was not an easy decision to make, I wanted to be honest and to explain my reasons,” said Neuer, who has won 17 caps for Germany.

“I know this is not a great moment for Schalke fans, but I am a professional footballer and I am looking from a different perspective. It is clear some fans will be upset.”

“Bayern have asked for a meeting, but we have said that is not possible at this moment in time,” he said. “We have some important sporting objectives coming up, but eventually there will certainly be a meeting and we will talk.”

Having become Schalke’s first-choice goalkeeper in 2006, Neuer took over as Germany’s number one at last year’s World Cup and is enjoying a stellar season.

“We have taken note of this news with a heavy heart. We must accept and respect it,” said Heldt.

Bayern have long been reported to be set to offer Neuer a four-year contract as they have not settled on a regular goalkeeper since captain Oliver Kahn retired in 2008.