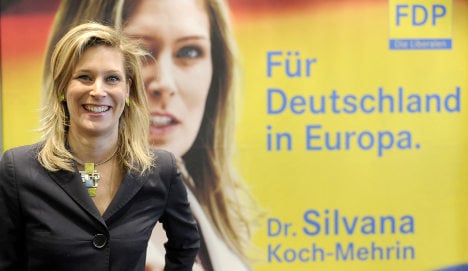 A preliminary report released by the internet platform Vroniplag Wiki says 56 of the 201 pages of the MEP’s dissertation contained provable incidents of plagiarism.

Koch-Mehrin got her doctorate for a dissertation entitled, ‘Historic Currency Union between Economy and Politics’ at Heidelberg University. Dons there have already started an academic investigation after allegations were first made against Koch-Mehrin.

Although this investigation could take weeks, the Süddeutsche Zeitung reported that it could still be finished by the FDP’s party convention in the middle of May.

It said that should that investigation conclude she stole a significant amount of her dissertation it would not only be a major setback for the 40-year-old’s considerable political ambitions. It would also be a body blow for her party which despite having ditched its unpopular leader Guido Westerwelle for Health Minister Philipp Rösler, still languishes below the five percent mark in many opinion polls.

The Vroniplag Wiki report said that not only did 56 of the 201 pages include plagiarism, but that the sources were, “noticeably often articles from textbooks dealing with economic theory and economic and social history.”

It said that in at least four places, her work included more than three-quarters of a page of plagiarised text.

The report concluded that sources were used to a considerable degree but were not well-enough sourced as quotes. “This presents a blatant break with academic standards,” the report said.

Perhaps even more damaging, the report said that, “The frequent changes to the plagiarised texts as well as the fact that these were to be found all through the entire dissertation, leads to the conclusion that the taking of text was not a mistake but was done knowingly.”

The site then raises the question of whether the dissertation was a misuse of tax money as it was funded by the Friedrich Naumann Foundation, with money from the Federal Ministry for Education, Science, Research and Technology.

The former Defence Minister Karl Theodor zu Guttenberg of the Christian Social Union was forced to resign at the start of March after his doctoral dissertation was found to have been widely plagiarised. In comparison to his, that of Koch-Mehrin was not as bad, according to a member of the Vroniplag Wiki platform involved in the investigation.

“If you compare this with the Tour de France, then we could say that we have caught Koch-Mehrin doping, while Guttenberg rode off on a motorbike,” a spokesman told the Frankfurter Rundschau daily. “But you get banned for doping too,” he added.

Koch-Mehrin has not yet commented on the allegations.