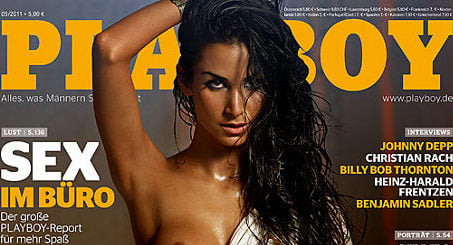 “Sila is a great woman with a fantastic body,“ Jörn Schlönvoigt, 24, told the BZ tabloid this week. “It would almost be a shame to deprive other people visually. I find the images beautiful and very well done.”

The nude shots of the 25-year-old Sahin, who stars on the popular German soap opera, Gute Zeiten, schlechte Zeiten (Good Times, Bad Times), surprised not just her parents, but also colleagues and even Schlönvoigt himself.

“It was only when she flew to the photo shoot in Sri Lanka that Sila told me about it,” Schlönvoigt told the newspaper.

Sahin told the soap opera’s website that her father was merely unhappy with her decision, but her mother was furious.

“My mother is still angry with me. I couldn’t reach her at all,” she told the soap opera’s website.

But in an interview with Playboy, Sahin said she was proud to be the first German-Turkish woman to be on the magazine’s cover. But she seemed to cling somewhat to her conservative upbringing, denying ever sleeping with women or having one-night-stands.

“Many of my countrymen think it’s great that I can live so freely,” she told the magazine.