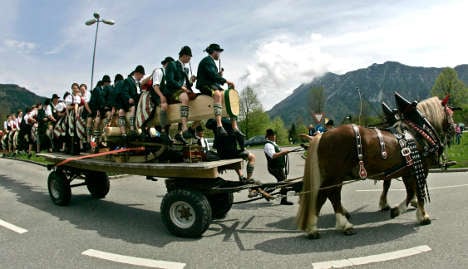 The good people of Heimstetten, near Munich, have divided up the hours of darkness from now until May 1, according to the Süddeutsche Zeitung.

It reported on Tuesday that the villagers have arranged things so there is always someone guarding the 32-metre long pole which will soon be painted in traditional colours and then erected on the central square.

Until then, the Heimstetteners have to keep the Riemers, Poingers and apparently particularly the Ismaningers away from their pole. It is tradition that as soon as the chosen spruce tree has been felled, trimmed up and brought into the village it becomes fair game to rival locals who have, over the last centuries, caused red faces by stealing their neighbours’ maypoles.

And although there is a reasonable measure of tongue-in-cheek involved, the pride of the village as exemplified in the maypole is being harnessed to try to keep villages like Heimstetten together.

“The maypole keeps the village community lively,” said Josef Glasl, spokesman for the local bowling club, which has been responsible for the maypole since 1966.

He told the Süddeutsche Zeitung the maypole played an important role in keeping a balance between modern, urban life and more traditional pursuits.

Heimstetten is perhaps more in need of such a counterweight than other places, he suggested – it is right next to Munich, and even has a local train connection which can take Heimstetteners into the centre of the city in just 21 minutes.

Village elders have long worried that this attractive feature could end up ruining the character of their rural idyll – that the 7,000 people living there could start feeling they are inhabitants of a dormitory suburb of Munich rather than a place with its own identity.

So the bowling club takes great care over the maypole, and has kitted out the shed where it is being kept, with a bar and beer garden benches so that people will come. Toilets have been installed as well as a sound system and an area for sausages to be cooked.

The idea is that if many people are in and around the maypole shed, it would be more difficult for outsiders to sneak in and make off with the enormous pole. The bowling club is organising a different party almost every night, with those who have taken on the responsibility of a watch playing barman for the night. It is a ruse which seems to be working so far in the good weather – at the weekend the place was full to bursting.

The sharp eyes of the village – and the well-organised watch shifts which run from 6pm until 6am – have prevented the maypole ever having been stolen.

And although the logistics of bringing in enough people to lift the huge tree trunk onto a truck and get away with it might seem daunting, last year a group of Finsingers nearly managed it. They had already loaded the maypole onto a truck and were only about a hundred metres away from the village sign. If they had taken it past the sign, the Heimstetteners would have had to pay out three huge beers and a meal for each of the successful thieves.

It was Glasl and his son who stopped the theft last year, saving the village pride. They had got up early to fetch bread and saw the Finsingers on the way off with the maypole. There was no skirmish, Glasl simply put his hand on the maypole and said, “The tree stays here” – apparently enough to settle the matter.

The Heimstetteners should know all about maypole theft – they stole the one from the Hofbräuhaus back in 1986.

The bowling club makeshift beer garden is considered a good spot to store their pole until May 1 – there is a busy street at the front and train tracks at the back.

“We have a strategically good position this year,” said bowling club chairman Hans Rieger. “Although if many people come they could perhaps get it over the back fence and if one of them has good contacts with the rail company, they could take it off that way.”