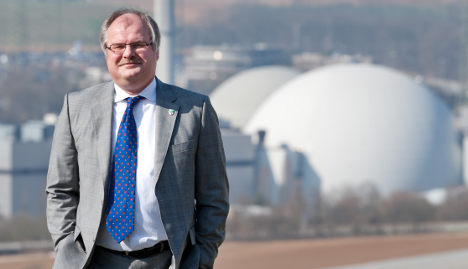 But anti-nuclear activist Wolfram Scheffbuch has taken to removing his whenever he comes to the small village of Neckarwestheim in the southwest of the country.

“It’s not the done thing here,” the 40-something said.

Neckarwestheim is home not just to one nuclear reactor, but two – Germany’s oldest, in service since 1976, and its newest, up and running since 1989. The villagers are vehemently opposed to shutting them down.

The spewing of radiation by Japan’s stricken Fukushima plant since March 11’s earthquake and tsunami has shaken faith in nuclear power in Germany perhaps more than other European countries.

Recent weeks have seen huge demonstrations calling for Germany to stop using nuclear power, culminating on March 26 in a mass demonstration in towns around the country which organisers said involved a quarter of a million people.

The next day, Chancellor Angela Merkel’s conservatives were turfed out of power in the southwestern state of Baden-Württemberg, home to Neckarwestheim, after 58 years in charge.

The main reason for the political upset was opposition to nuclear power, which helped the Greens to hugely improve their performance, not only in Baden-Württemberg, but also in other state elections.

Merkel is reconsidering the decision she took last year to postpone by more than a decade – until the mid-2030s – the date when Germany goes nuclear-free. The country’s seven oldest reactors have already been shut down pending a safety review.

But the inhabitants of the village are having none of it. Here the Greens fell well short of the 24 percent they scored in Baden-Württemberg as a whole.

“They only got 13 percent or so,” the mayor of the village for the past 15 years, Mario Dürr, proudly told AFP news agency.

And despite the fact that Merkel’s Christian Democrats (CDU) scored 49 percent, 10 percentage points more than in the state as a whole, Dürr doesn’t like the government’s nuclear re-think.

“I am not like the chancellor,” he says. “I don’t change my mind the whole time.”

Looking around the well-ordered village, with its tennis courts and ultra-modern sports hall under construction, it is easy to see why its inhabitants are no fans of a nuclear-free future.

The operator of the nuclear reactors, Energie Baden-Württemberg, better known as EnBW, accounts for 80 percent of the village’s corporate tax receipts, and 250 villagers work at the plant.

The local nightclub where Neckarwestheim’s youth goes to dance and hang out is called the Uranium Bar.

“You have to live well here,” the mayor says.

Suntanned Elisabeth Rech, who has managed the village’s Hotel am Markt for the past 20 years, is rushing off to play golf, but has time to tell AFP that her business would be ruined if the reactors go.

“The power station accounts for almost 90 percent of my revenues,” she says.

“And what would be the point of shutting down our reactors if we end up importing electricity from France?”

France, which borders Baden-Württemberg to the west, generates some 80 percent of its electricity using nuclear power.

Pensioner Maria Neubauer, tending her garden in full view of the reactors, feels the same.

She’s not unhappy about the prospect of the oldest reactor never being switched on again, which seems likely. Because of the radioactivity?

“Yes, and also because there is less steam. Sometimes it really ruins the view.”