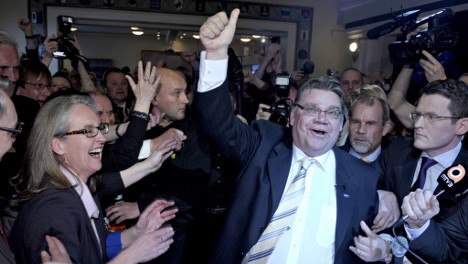 Amid fears that bailout packages for weaker EU members in a bid to stabilize the euro may be at risk after the rise of True Finns, Berlin moved to head off speculation that a new battle may erupt over the currency.

“It has been a sound European tradition and also the successful recipe for Europe that, regardless of changes of government, compromises already agreed to are adhered to afterwards,” deputy government spokesman Christoph Steegmans said when asked about the developments in Finland.

In Helsinki, meanwhile, the True Finns, who campaigned on an anti-bailout platform, said they were prepared to discuss joining a ruling coalition after winning 19 percent of the vote in Sunday elections.

In Germany, former Foreign Minister Hans-Dietrich Genscher wrote in a contribution to Tuesday’s edition of the daily Mitteldeutsche Zeitung: “The result of the election in Finland is a wake-up call. It is a warning signal. Its significance goes beyond Finland.”

The nationalist True Finns won 39 seats in the 200-strong parliament, just behind the 44 for the centre-right National Coalition Party and the 42 snared by the Social Democrats – making them potential kingmakers.

True Finns campaigned successfully on a deeply-eurosceptic platform, opposing bailout packages to troubled eurozone members such as Portugal and Greece.

Leader Timo Soini said on Sunday after the party’s triumph that Finland’s political status quo had been “too soft on Europe.”

He added that he wanted to renegotiate the bailout package to Portugal, though he did not offer details.