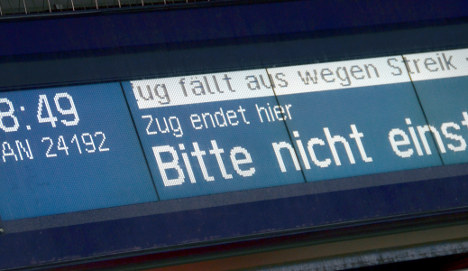 Rail union GDL announced the strike, which will run from 2 pm Monday to 2 am Thursday.

Only last week, drivers from the five firms walked off the job for 48 hours over better pay.

In total, the drivers have been on strike for 119 hours since March. They are demanding a single wage scale for all train drivers in the country, using the national operator Deutsche Bahn as a benchmark.

Further heightening the tension, Saxony-Anhalt carrier Veolia has locked out its drivers. Other firms include Abellio, Arriva, Benex and Hessische Landesbahn.

One operator, Keolis Deutschland, has had “constructive negotiations” with GDL and therefore is exempted from the strike, the union said. This showed that there was a political will to solve the dispute, GDL added.

The union has just struck a deal with Deutsche Bahn for a comprehensive pay scale for the 20,000 drivers who work for the national operator.