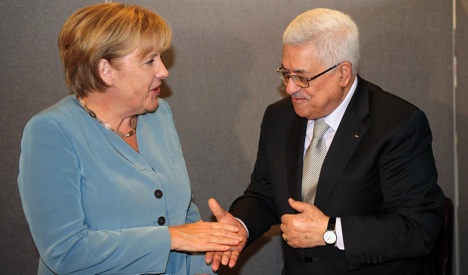 “We will ask the Europeans – I will go to France on 21st, and next month I will be in Germany … to ask ‘What shall we do?’ because we want their advice,” he said in the interview late on Friday.

“We will ask (French President Nicolas) Sarkozy for his advice,” Abbas told

news agency AFP, saying he wanted the Europeans’ advice about the steps leading to the recognition of a Palestinian state later this year.

His remarks were made just days after the cancellation of a meeting of the Middle East Quartet which had been hoping to find ways of bringing Israel and the Palestinians back to the negotiating table.

The Quartet principals had been expected to meet in Berlin on Friday but the talks were blocked by Washington, diplomats at the UN said.

Britain, France and Germany had been hoping to use the Berlin talks to push for a Quartet statement setting out specific guidelines for peace negotiations which would have included references to the major final status issues.

The three nations laid out their position in a communique issued in February after Washington torpedoed a UN Security Council vote condemning settlement activity, in which they called for “clear parameters” relating to the 1967 borders, security issues, refugees and Jerusalem.

Abbas said the Palestinians had wanted the elements of the communique to be used by the Quartet “because all the elements of a solution are in this statement, but unfortunately nothing happened and time is passing”, he said.

“If we get to September without any results, of course we will ask the American president (Barack Obama) to fulfil his promise that he wishes to see a state with full partnership in the United Nations,” Abbas said.

Palestinian negotiator Nabil Shaath told AFP that the leadership would press ahead with the move even though it was clear that the United States would veto the initiative.

The resolution can be invoked in cases where the Security Council fails to act due to a dispute between its five permanent members, Shaath explained, saying he believed the Palestinian case would fit the criteria for such a referral to the General Assembly.

“They can admit us as a full member of the General Assembly and when we become a full member recognised by two thirds of the community of nations, we become an independent state whose land is occupied illegally by another member,” he said.

“This is what’s scaring Mr (Benjamin) Netanyahu and that’s what Mr (Ehud) Barak calls the tsunami of September,” he said, referring to the Israeli prime minister, and to the defence minister who has warned that the UN bid will mean Israel faces a “diplomatic tsunami.”

Direct talks between Israel and the Palestinians ran aground late last year after the expiry of a temporary ban on settlement construction.

Since then, the Palestinians have refused all direct contact, saying they will not talk while Israel builds on land they want for a future state.