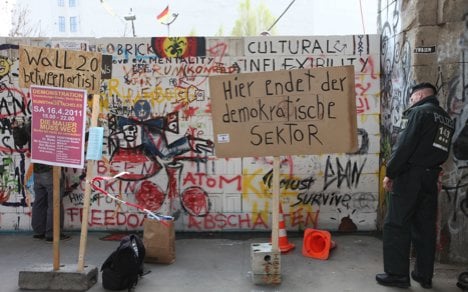 Several hundred people showed up to the demonstration, during which the head of the “Tacheles Verein” (Tacheles Association) Martin Reiter called on Berlin Mayor Klaus Wowereit to find a solution to the seemingly intractable problem.

“Berlin is worth more than the investors are prepared to pay,” Reiter said.

The official receiver built a 2.5-metre wall inside the art house on Tuesday to secure the building, and hired security personnel for the demonstration. Reiter called on Wowereit to “smash the wall with a hammer.”

Love-Parade founder Dr. Motte also appeared to lend his support to the artists who want to stay. Addressing the crowd, Motte said, “If you sell Tacheles, you sell Berlin.”

Gruppe Tacheles, representing about 80 occupants of the disputed site, recently accepted a €1 million payment to leave, but no-one knows exactly who offered the money.

A further 80 loosely grouped artists – who are separate from Gruppe Tacheles and have an antagonistic relationship with them – are staying in the property.

Wowereit showed little sympathy for the stragglers, saying the €35-million property was a good place for further development.

“You can’t just throw a protective blanket over every ruin that came out of the war or the division of the city,” he told Saturday’s edition of Berlin newspaper Tagesspiegel. “That isn’t sensible urban planning.”

“There are other spaces where something new can appear, and they might also disappear in 10 or 20 years,” he added.

The graffiti-smothered squat has for years been the subject of a byzantine saga pitting developers and a major bank against the artists and different artist factions against one another.

Occupied soon after the fall of the Berlin Wall, the former Jewish department store in Berlin’s Mitte district became the capital’s best-known bohemian hang-out and a major tourist attraction.