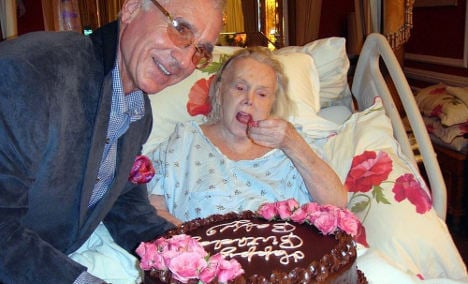 The 67-year-old and his ailing 94-year-old wife Gabor have commissioned a Beverly Hills fertility clinic with finding an egg donor and a surrogate to carry von Anhalt’s child.

“Following my wife’s difficult operation of five months ago we remembered that we’d always wanted to have a child,” he said. “And then we thought, ‘Maybe it’s still not too late’.”

A psychiatrist must still review whether von Anhalt will make a suitable father, he said.

The perfect egg donor and surrogate will be pretty, intelligent, and either Hungarian like his wife, or German like himself, he said.

“If my wife dies at some point then I will have nothing to live for,” von Anhalt said. “I would then like to care for our child.”

Gabor already has a 64-year-old daughter from her second marriage to hotel magnate Conrad Hilton.

Von Anhalt, the son of a German police officer who acquired his title through adoption by Princess Marie-Auguste von Anhalt in 1980, has only had a near miss with

fatherhood. In 2007 he claimed to be the father of Playboy model Anne Nicole Smith’s daughter Dannilyn.