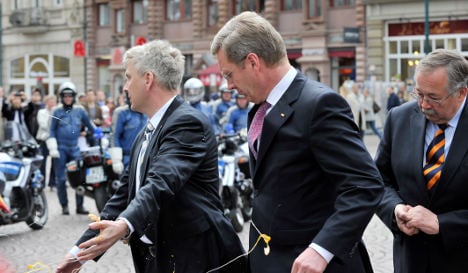 Wulff, at 51 the country’s youngest-ever head of state, had just arrived in the western city of Wiesbaden when a 48-year-old man in the crowd starting lobbing eggs at him, police said in a statement.

“The clothing of the federal president was soiled,” the authorities said. “The president himself is doing fine.”

Wulff was accompanied by Hesse state premier Volker Bouffier, who was also smeared with yolk. Police overpowered the egg-wielding assailant soon after the ambush and took him into custody.

The president told reporters that he had asked to keep security measures as low-key as possible.

“I like to have contact with citizens,” he was quoted as saying. “That means getting hit by an egg now and then.”

Soon after, he appeared in a fresh jacket and posed for a picture with a group attending a Girls’ Day event at the state parliament.

Not all German politicians have managed to take such assaults in their stride.

Then chancellor Helmut Kohl was ambushed by demonstrators hurling eggs, tomatoes and paint in the eastern city of Halle in 1991. The furious German leader ran after the attackers but his staff and a crowd barrier prevented him from levelling a blow.