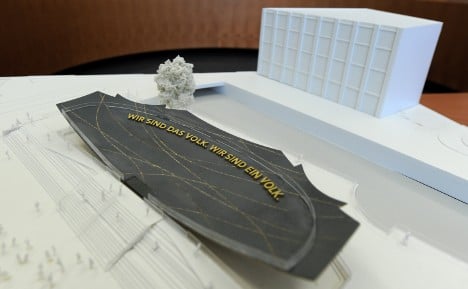 Culture Minister Bernd Neumann announced late on Wednesday that officials were backing a proposal to build a 50-metre-wide tilting structure near the German capital’s Museum Island.

Proposed by Stuttgart designer Johannes Milla und Berlin choreographer Sasha Waltz, the memorial will allow the public to walk onto the huge seesaw, which will tip back and forth. The movement of the bowl-like structure is meant to demonstrate how people can change the world, as East Germans did when the Iron Curtain fell in 1989.

The glass and metal structure will be built on the foundation of where a statue honouring Kaiser Wilhelm once stood on Schlossplatz. The top of the memorial will be emblazoned with slogans of the peaceful revolution in communist East Germany that paved the way for reunification. The golden bottom of the bowl will show iconic images from 1989.

The design beat out two other proposals including a five-metre-high bronze statue and canopy covering the foundation of the kaiser statue.

The decision ends a long-running debate about how best to remember the momentous events of two decades ago.

A first competition with 533 entries was broken off after none were found satisfactory. The three finalists were pulled from a pool of 386 entries in a second round.

The winning memorial is expected to be built in the next two to three years.