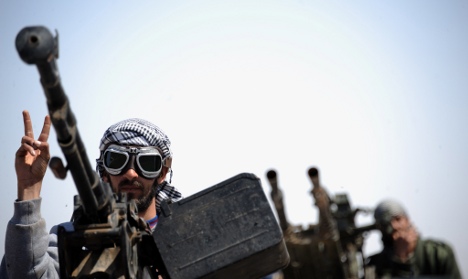 US Secretary of State Hillary Clinton and her European, Canadian and Turkish counterparts were to hold two days of talks in the German capital, two weeks after NATO took over a mission that divided the military alliance from the start.

After launching the first salvos to protect Libya’s population nearly a month ago, Britain and France are pressing their partners to contribute more combat jets to protect the population from Muammar Qaddafi’s forces.

Only six out of NATO’s 28 members are conducting air strikes to protect the population from Qaddafi’s forces, while French and British warplanes are carrying out half of the flights, a French official said.

“We must collectively be able to carry out our mission, which is to protect the population,” said the official.

The squabble recalls the debate over troop contributions in Afghanistan, where the United States provides two-thirds of the soldiers while Europeans mull their exit strategies.

The United States has moved into a back-up role in Libya, leaving nearly all the air raids in the hands of its allies.

From the outset, France was reluctant to hand NATO control of the Libyan mission, which Paris launched with a US-British coalition last month, while Germany and Turkey opposed any military intervention, sparking the most bitter debate since the US-led war in Iraq in 2003.

Now, Paris is increasingly frustrated with the pace of air strikes as the battle has turned into a tug-of-war between regime and rebel forces, with Qaddafi entrenched in Tripoli and the opposition controlling the east.

NATO has already come under criticism from rebels urging the Western alliance to drop more bombs on Qaddafi’s tanks and artillery.

The NATO meeting follows intense efforts on the diplomatic front, after the African Union failed to broker a ceasefire earlier this week and after the international contact group on Libya met in Doha on Wednesday.

Cameron said the two leaders would discuss “what more we can do, how can we help the opposition, how can we make more military pressure through NATO, what we can do to target this regime and the dreadful things they are doing.”

During the working dinner, Sarkozy and Cameron agreed to increase “military pressure” on Qaddafi who “stays determined to maintain his war effort against his own population,” a French presidency source said.

Spain has brushed off the Franco-British pressure, saying the NATO mission was doing well and allies did not need to deploy more assets, while Italy said it was “perplexed” by their demands.

Germany has refused to take part in the mission and even abstained from the UN Security Council vote authorising the strikes.

“We will not see a military solution” in Libya, German Foreign Minister Guido Westerwelle said in Doha on Wednesday.

In Doha, world powers offered cash to Libya’s rebels and the means “to defend themselves” while issuing fresh demands for Qaddafi to relinquish power.

But the idea of arming rebels also divides NATO members.

Belgium opposes it, while Italian Foreign Minister Franco Frattini said “either we make it possible for these people to defend themselves, or we withdraw from our obligation to support defending the population of Libya.”