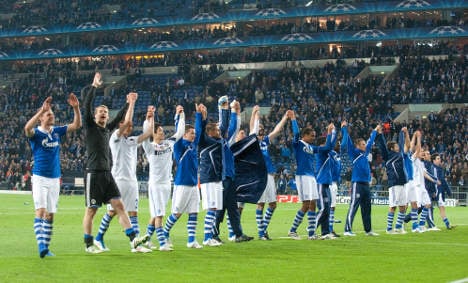 Having won the quarter-final first-leg 5-2 at Inter’s San Siro stadium last week, the second-leg back in Germany was always going to be a formality.

Spain legend Raul opened the scoring on the stroke of half-time to extend his record Champions League tally to 71 goals while Inter midfielder Thiago Motta levelled minutes after the restart.

Germany defender Christoph Metzelder, playing with a mask to protect a healing broken nose, said the Bundesliga side are growing in confidence.

“We have seen in the two games just how much potential this team has, we really wanted to win this game outright,” said Metzelder.

Schalke are now set to win just short of €55 million for reaching the last four.

“We’ve produced two great performances,” said Rangnick. “If you only allow the Champions League winners a couple of chances, you know you have played well. Each player worked hard for each other and that was the key to our success.”

Inter came to Gelsenkirchen facing a near-impossible task of needing to score four goals to go through to the semi-finals to face Premier League giants United.

Schalke will host United at their Veltins Arena stadium on April 26 in the first-leg of the semi-final, with the return leg at Old Trafford on May 4.

United manager Sir Alex Ferguson was in Gelsenkirchen amongst the crowd of 54,000 to watch the Royal Blues’ quarter-final.

The hosts took the lead just before the half-time break when Spanish midfielder Jose Manuel Jurado split the Inter defence with a perfectly-timed pass into the path of compatriot Raul.

The Spain veteran needed no second invitation to round Inter goalkeeper Julio Cesar and slot his shot into an empty net.

It was the Spaniard’s 71st Champions League goal, his fifth goal of this European campaign and the 33-year-old’s 18th since joining Schalke from Real at the start of the season.

It put Schalke up 6-2 on aggregate and effectively killed off any flicker of hope the Italians had.

The guests levelled the scores when Motta was left unmarked from a corner and headed home on 49 minutes.

Schalke looked to have regained the lead on the hour mark only for Höwedes’ header to be ruled off-side, but the defender scored the winner when he ran onto a long pass from Raul to drill his shot past Julio Cesar.