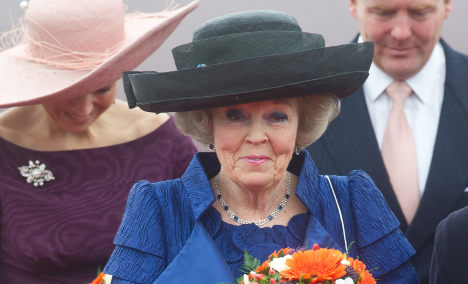 The queen, her son, and his wife. Photo: DPA

The President was set to welcome the 73-year-old monarch at Bellevue Palace at 11 am with military honours.

Ahead of her arrival, Wulff underscored the connection between the two countries.

“Germany and the Netherlands are bound by much more than a common border – namely the best of neighbourship and friendship,” he said.

After meeting with Wulff, the Queen will discuss business partnerships between the two countries with Chancellor Merkel.

Later in the evening, a state banquet with some 150 guests will be held at Bellevue Palace in honour of the Queen, whose motto for the visit is “The New Germany.”

She will be accompanied by Crown Prince Willem-Alexander and his wife Máxima.

On Wednesday, Queen Beatrix and President Wulff will lunch with German youths born in 1990, the year of Germany’s reunification.

The Queen and her family will then travel on to the states of Saxony and North Rhine-Westphalia on Thursday.